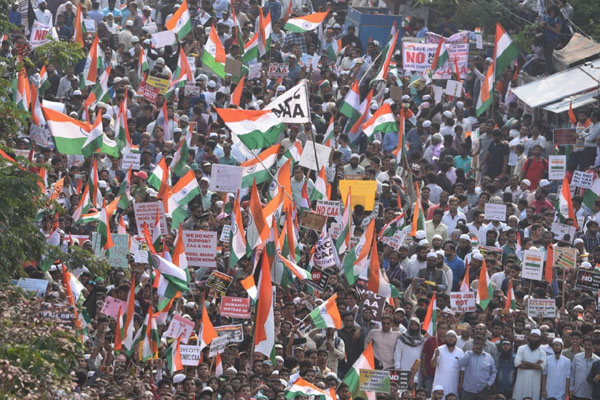 Thousands of people participated in a massive march here on Saturday to protest against the Citizenship (Amendment) Act (CAA).

Roads around Indira Park in the heart of the city were teeming with thousands of men, women and children carrying Indian flags, banners and placards and raising slogans against Narendra Modi government.

Citizens from various walks of life joined hands to participate in the march, so far the biggest protest against the CAA in Hyderabad.

Shops and business establishments were closed in parts of Hyderabad as the businessmen and traders turned out to participate in the march. Several educational institutions had also declared a holiday.

The participants were raising slogans like ‘Inquilab zindabad’, ‘Tanashahi nahi chalegi’, and ‘we reject NRC’.

They were carrying banners and placards with slogans like “We will die but not accept CAA, NRC and NPR” and “United against hate”.

“The real issues are economy, education and health and not Hindu-Muslim, Pakistan and NRC,” read a banner.

“CAA is discriminatory against Muslims. We will not accept it,” said Syed Sajid, a student participating in the march

“CAA is not the only issue. The government is going to start NPR which is nothing but the first step towards NRC,” said Zohra Begum, a housewife, holding the national flag.

“Our ancestors decided to remain in India on a call given by Maulana Abul Kalam Azad. This is our country. We were born here and will die here,” said another protester.