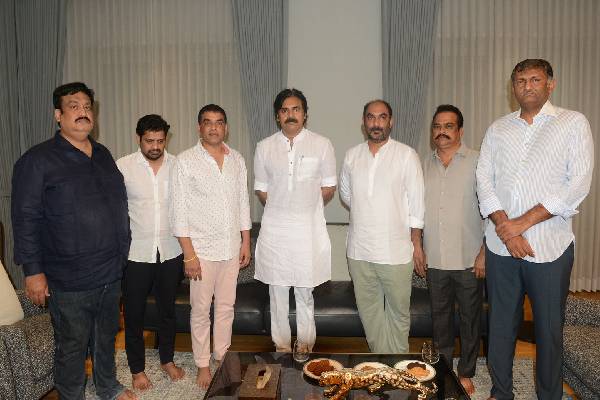 There are heated discussions going on between Pawan Kalyan and the YSRCP government in Andhra Pradesh. The exchange of verbal abuse reached new heights. Some of the prominent producers have met AP Minister Perni Nani which turned out to be the topic of discussion. Top producer Dil Raju was cornered badly for the past two days. All the producers who met Perni Nani in Machilipatnam a couple of days ago met Pawan Kalyan today in his Hyderabad residence.

Dil Raju, DVV Danayya, Mythri Naveen, UV Vamshi, Bunny Vasu and Sunil Narang met Pawan Kalyan. Dil Raju along with the producers informed Pawan Kalyan about their plans and about the happening discussions. They also explaiend him about the major developments regarding the ticket pricing in Andhra Pradesh. Pawan Kalyan was quite convinced with them and he asked them to go ahead with their plans.