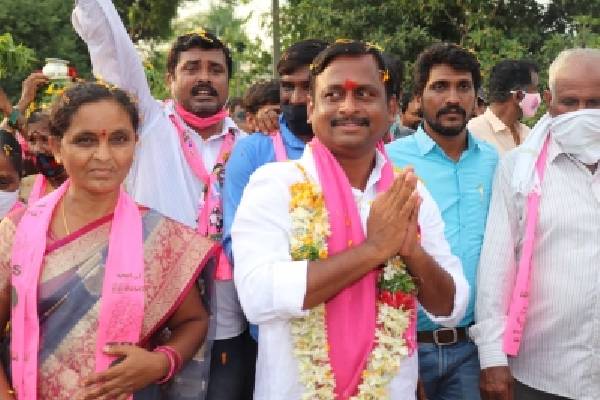 Two nominations were filed on Friday, the first day for filing of nominations for the by-election to the Huzurabad Assembly constituency in Telangana.

With the Election Commission of India issuing a notification, the poll process has begun for the October 30 by-election.

As per the schedule announced by the EC, the last date for filing of nominations is October 8.

The Huzurabad Assembly seat fell vacant with the resignation of former minister Eatala Rajender after he was dropped from the state Cabinet by Chief Minister K. Chandrasekhar Rao in May following allegations of land encroachment.

Rajender also quit the TRS to join the BJP and will be entering the fray as the saffron party’s candidate.

TRS named its student wing chief Srinivas Yadav as the party candidate for the by-election. The Congress party is yet to announce its candidate.

The by-election raised the political temperature in the state as Rajender targetted the Chief Minister by alleging that he was insulted in the party. The BJP is citing Rajender’s alleged humiliation to mount fresh attack on TRS for what it calls the family rule of Chandrasekhar Rao.

After ending his nearly two-decade-long association with TRS, Rajender launched an aggressive campaign in Huzurabad targeting the TRS government.

BJP’s state unit chief Bandi Sanjay is also currently undertaking a ‘padyatra’ which will cover the Huzurabad constituency as well.

The TRS government also picked the constituency for implementing its prestigious ‘Dalit Bandhu’ scheme on pilot basis. It has already sanctioned Rs 2,000 crore to implement the scheme under which every Dalit family will be given a grant of Rs 10 lakh to start business of its choice.

The government’s move came under criticism from the opposition parties and some NGOs who alleged that the TRS is trying to lure the voters. A couple of NGOs also moved the Telangana High Court, but the latter refused to interfere in the matter.