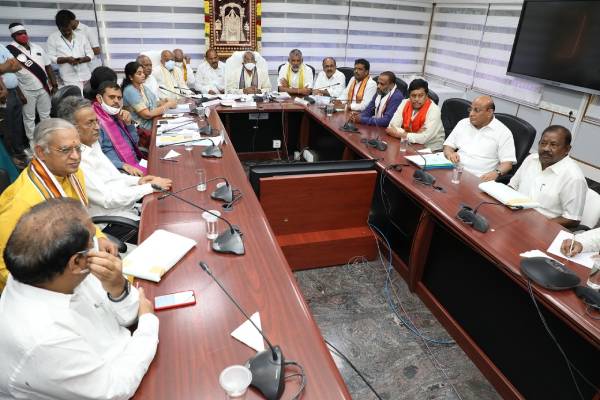 The Tirumala Tirupati Devasthanams (TTD) has decided to construct Lord Venkateswara temples in Mumbai and Varanasi.

TTD chairman Y.V. Subba Reddy on Saturday said about the new temples plans, while thanking the members of the trust board, TTD authorities and employees on successfully completing two years in office.

Already, TTD laid the foundation for a temple at Majhin village area in Jammu, in an endeavour to construct a temple in the Himalayas.

TTD board contemplated to build 500 temples in the past two years with the help of Samarsata Foundation and endowments department but could not execute the plans due to the pandemic.

However, the temple body aims to complete them in the next one year in Dalit localities, agency areas and fishermen colonies.

“Srivani Trust funds to be utilised towards construction and renovation of temples in backward areas,” he said.

TTD will also be implementing pilgrim allowance to pensioners of HDPP, similar to regular retired employees of the temple body.

“A committee to be constituted to look into the eligibilities of contract and outsourcing employees working in TTD for regularization,” said the chairman.

“To weed out the ill effects of Covid-19 pandemic, TTD has taken up several spiritual programmes in the last 14 months in Nada Neerajanam platform at Tirumala by telecasting live on SVBC which boosted confidence among world devotees,” said Reddy.

Other initiatives include the removal of all unauthorised shops in Tirumala, laying the foundation stone for a pediatric hospital in Tirupati by Chief Minister Y. S. Jagan Mohan Reddy and a plan to construct 13 kalyana mandapams in viable areas.