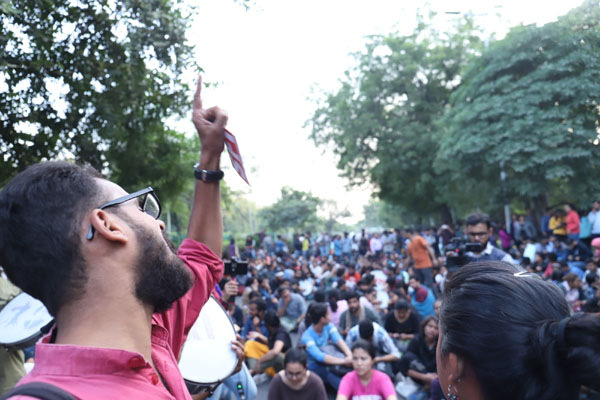 A day after scores of Jawaharlal Nehru University Students were injured or detained during their protest against hostel fee hike here, the issue trended on Twitter on Tuesday, with strong reactions from both supporters and those opposed to them.

One user commented: “#JNUProtests for the future generations of the poor of this country who wish to take admission in #JNU.”

A tweet by another user maintained: “If fee hike continues, only rich can get that opportunity,” accompanied by hashtags StandWithJNU, EmergencyinJNU, TaxPayersWithJNU, JNUBachao, JNUBachaoAndolan, and JNUShowdown.

A Twitter user criticised that the “Govt in 6 years has not made a Single University… But in 6 years they are trying to Destroy JNU, Destroy BHU, Destroy ALU, Destroy Jadavpur university”.

A user took aim at facilities provided to lawmakers, pointing out that they enjoyed free accommodation, free electricity up to 50,000 units, free medical facility on CGHS, free water up to 4000 KL, free travelling allowance, free telephone facility, and subsidized meals. “And then shouts ‘JNU student are Freeloaders'”.

“Shame on Delhi police and Modi Sarkar. The police atrocities on peaceful students are a blot on democracy. Education is our basic right and #WeStandWithJNU. No dictator can suppress student power,” said #JNUBachaoAndolan.

A user opposed to the agitating JNU students remarked: “Just shut down the JNU for some years”.