Tollywood young sensation Vijay Devarakonda is venturing into production and the actor announced his own banner ‘King of the Hill Entertainments’ sometime ago. He also announced that Pelli Choopulu director Tharun Bhascker will play the lead role in this new age drama. Today the details about the project are announced by Vijay Devarakonda and Tharun through an innovative video byte.

The film is titled ‘Meeku Maathrame Chepta’. The script formalities of the film got wrapped up recently and Vijay Devarakonda seems to be extremely impressed with the script. Tharun Bhascker lost huge weight for the film revealed in the video. More details about the project will be made official soon. 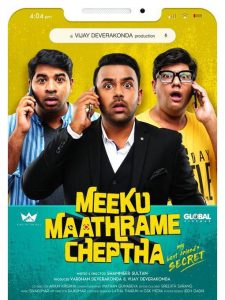