Star director VV Vinayak made an official announcement about his next project on Balakrishna’s birthday. He confirmed that producer C. Kalyan will pool resources for this crazy combination. However, there have been numerous rumours that NBK is not convinced with Vinayak’s script leading to further speculations that the project has been shelved.

Responding on these rumours, Vinayak clarified that his film with Balakrishna is very much on cards and will go on floors once the latter wraps up NTR biopic. Vinayak also revealed that the script work is underway and he will pitch the final draft to NBK very soon.

Vinayak is confident that he can convince Balakrishna with a powerful script despite the embarrassing result of his last outing Intelligent with Sai Dharam Tej. As Balakrishna has also committed to work with Boyapati Srinu in 2019, it remains to be seen when will Vinayak’s film start rolling. 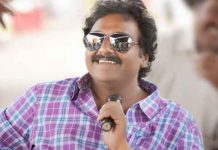 VV Vinayak to return back to Direction