Switch to: తెలుగు
Home Movies Movie News We can recreate the young Version of Kamal sir with Ram Pothineni... 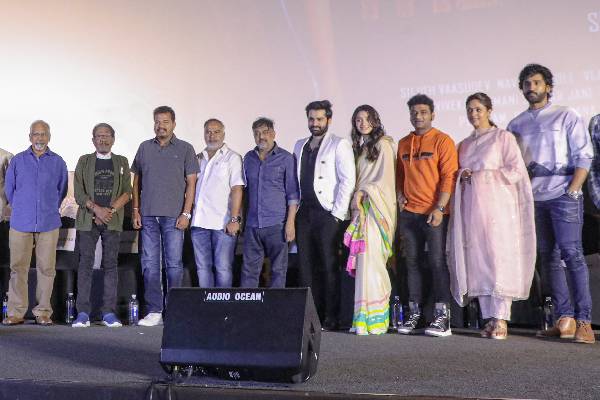 Ram Pothineni said that the star studded event seemed like an Award function and each person graced here is indeed an award for Linguswamy’s good heart. Maniratnam called the director as the nerve center for him. Vasanth Balan mentioned him as the Real Warrior at the event.

Remembering the ace direction of Linguswamy, Actor Vishal, director Karthik Subbaraju and Vasanth Balan said that this film will be the strongest comeback for Linguswamy in Tamil and a grand debut in Telugu.

Heaping immense praises on Linguswamy, Ram Pothineni & Aadhi Pinisetty, each one of them wished the entire team a blockbuster success.

Overwhelmed with all their words, Ram Pothineni thanked everyone for giving such a grand welcome for his debut in Tamil Cinema.