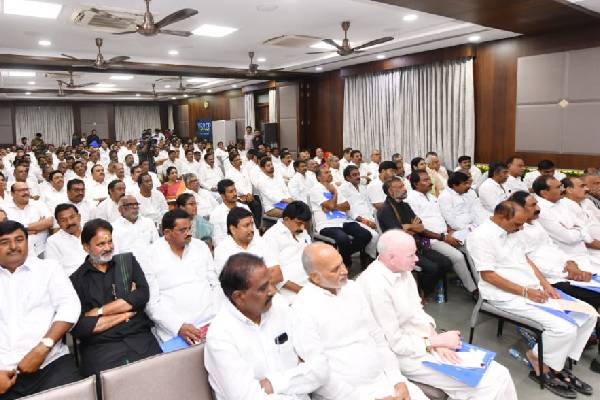 The meeting was called for an orientation to explain the action plan on how the regional coordinators, district party presidents and constituency observers should work in coordination to strengthen the party cadre from grass root levels. Such a network will ensure the target of 175 out of 175 seats. This network should be strengthened and conveners should be appointed up to village and ward secretariat level, he said.

The procedures will be prescribed to the General Coordinators, Party Presidents and Observers while the MLAs are already participating in the door to door campaign to reach out to the public and ensure the implementation of welfare schemes, he said, adding that they are also visiting at least 4 to 5 secretariats per month.

Along with the door-to-door campaign initiated by the government, the party activities should continue in the village and ward secretariats. A programme has been designed to meet 1.66 crore families on behalf of the party in 10-15 days. For this 50 families will be mapped and a male and a female cadre will be in charge to carry the party message besides providing publicity materials.

Under village and ward secretariats there will also be three conveners for the party and at least one of them should be a woman. Those having political awareness and are active should be appointed as conveners. Two such people should look after every 50 houses covering 15,000 villages.

Elaborating on the networking, he said, there will be 45,000 conveners in all the village and ward secretaries. Initially, three conveners should be appointed for 15,000 secretariats who will later appoint in-charges for MLAs or Assembly constituencies. The party observers will ensure the implementation of the process in a proper manner.

Our hard work will yield the desired results. During out three and a half year term, 92 per cent of the households in rural areas and up to 80 percent in urban areas were benefitted out our welfare schemes. The regional coordinators should dust off any minor issues and the cadre should be united and take forward the good record of our governance to every household of the State, he said.