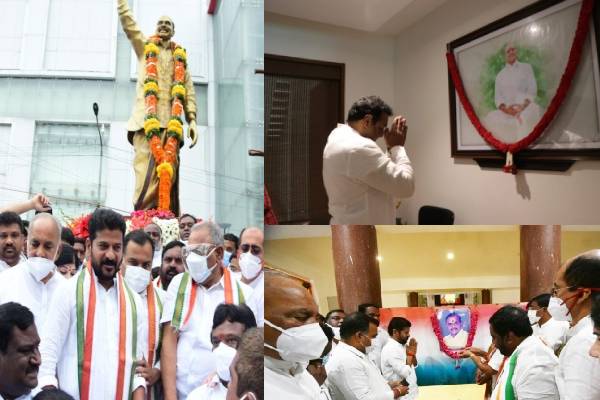 “You shared the weapon of undisturbed smile, you gave me the strength of fighting spirit. You taught me the lesson of not failing to keep up the word and I inherited your ambitions. Happy birthday, daddy,” said Jagan Mohan Reddy.

Continuing to reminisce his father, the chief minister said he sees him in the happiness of people and remembers his footsteps in every aspect of ruling the state.

Likewise, S. Rajiv Krishna, advisor to AP government fondly recalled his family’s 35-year association with YSR and said that he was one of the most wonderful human beings.

Chilakaluripeta MLA Vidadala Rajini said, “My humble tribute to the great leader whose life has been a message to all in public life. On YSR Jayanti today, I bow before the legend who has inspired me and holds a special place in all our hearts.”

Meanwhile, in Telangana capital Hyderabad, several Congress leaders celebrated YSR’s birth anniversary near his statues located at major traffic intersections such as Panjagutta and near the City Centre mall in Banjara Hills.

“My tributes to former chief minister of united AP YSR on his 72nd birth anniversary,” he said.