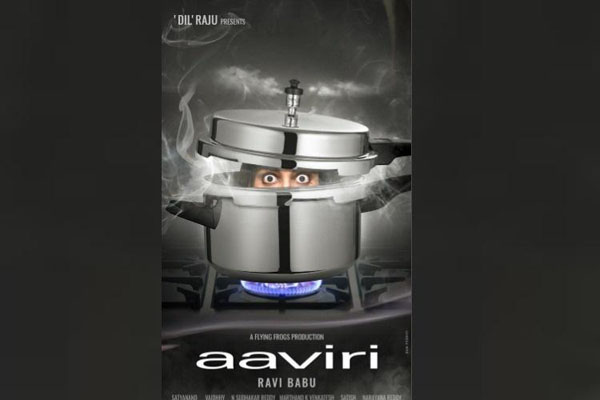 After flops like ‘Avunu 2’ and ‘Adhugo’, Ravi Babu has moved out of Suresh Productions’ camp to join Dil Raju’s camp. Has this association brought any luck to Ravi Babu? Let’s find out.

After their elder daughter Shreya’s death, Raj (Ravi Babu) and his Leena (Neha Chauhan) leave the house and move into a huge bungalow in the city. This house is fully secured with CCTV cameras and hi-tech gadgets as their younger daughter Munni (Sri Muktha) suffers from asthma and she should not step outside.

But a ghost keeps visiting Munni to snatch her away from the house. When it finally does, an occult professor visits Raj and Leena’s house to help them. Does he find the possessed spirit?

The standard thrills that we have seen in films like ‘The Conjuring’ occupy much of the initial sequences in Ravi Babu’s ‘Aaviri’. Ravi Babu takes plenty of time establishing routine stuff – a ghost indulging in playful acts that are neither scary nor innovative. As we patiently wait that things would turn for good by the interval, Ravi Babu doesn’t show any mercy on us. The narration goes on expected lines with lifeless sequences.

Like in Ravi Babu’s previous ‘Avunu’ movies, this film is set up in a huge house and the camera doesn’t pan to the outdoor much. In this claustrophobic setup, the film’s proceedings are dull and filled with outdated ideas. Such horror thrillers work only when it provides enough jolts to the audiences or the narration is engaging enough. The final twist also doesn’t make any impact at all.

A ghost spooks pizza delivery boy and moves things in thin air. We get to see such Vittalacharya-era sequences.

The less said about the logics the better. And a lot of scenes give the impression that Ravi Babu took things for granted and has made the movie with the lackadaisical approach. More care is given to the flashy production design inside the house than the scenes. Satyanand’s screenplay is lethargic.

Moreover, the actors with one-note expressions don’t lift the ‘spirits’. Except for the baby Sree Muktha, all the actors are unconvincing.

Technically production design is neat. Nothing much to rave about.

Ravi Babu’s ‘Aaviri’ is a tepid horror thriller. It lacks seriousness from the word go. Another boring outing from Ravi Babu.