From the past couple of days, several gossip portals created stories that Chiranjeevi and Charan are charging a bomb as remuneration for Acharya. Not stopping here, they also cooked that Ram Charan without investing a penny will enjoy 50% profits from Acharya. This did not go well with the makers and they issued a statement. Niranjan Reddy of Matinee Entertainments and Ram Charan’s Konidela Production Company are jointly producing Acharya. Koratala Siva is the director.

Niranjan Reddy cleared the air saying that the news is completely incorrect. He said that the duties and responsibilities are discussed between Matinee Entertainments and Konidela Production Company. He said that the film’s production is done accordingly and everything is equally shared between the producers. The shoot of Acharya is kept on hold currently. The film releases later this year. 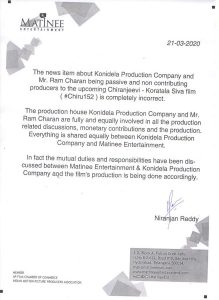