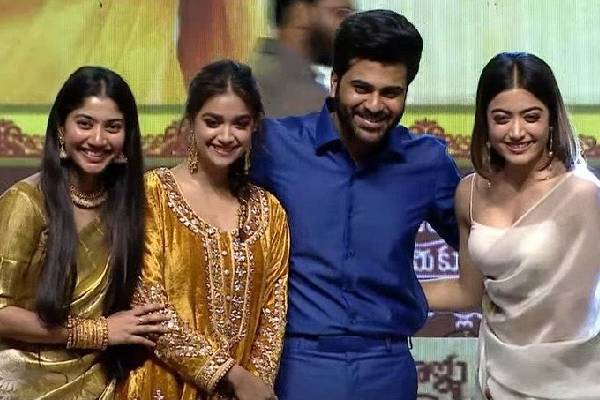 Young actor Sharwanand delivered a series of debacles and the actor has all his hopes on Aadavallu Meeku Johaarlu. The promotional content, trailer and songs look promising and the film appeals well to the family crowds. During the pre-release event of Aadavallu Meeku Johaarlu, Sharwanand revealed that AMJ is his caeer’s best film and he is super confident about the film’s success. The actor heaped praises on Sai Pallavi and Keerthy Suresh who are the special guests for the pre-release event.

Top director Sukumar attended the event as a special guest and he wished the team a huge success. Aadavallu Meeku Johaarlu is a family entertainer directed by Kishore Tirumala and Sharwanand, Rashmika played the lead roles. Devi Sri Prasad composed the music and Sudhakar Cherukuri bankrolled Aadavallu Meeku Johaarlu on SLV Cinemas banner. The film is gearing up for Friday release.