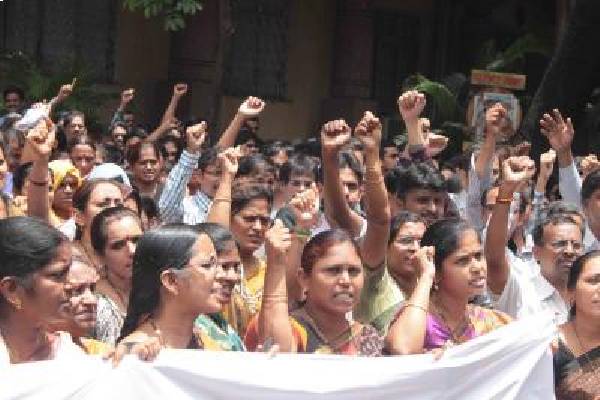 Government employees in Andhra Pradesh on Wednesday announced a series of agitation programmes to press for their long-pending demands, including implementation of the Pay Revision Commission recommendations.

The employees’ associations served notice to the state government, urging it to immediately act on the outstanding issues.

Leaders of the AP Joint Action Committee and the APJAC Amaravati met Chief Secretary Sameer Sharma at the Secretariat and served notice.

They expressed their displeasure over non-fulfilment of assurances given to the employees in the past.

APJAC leader Bandi Srinivasa Rao told reporters that though the government claimed to be employee-friendly, the assurances given by it on various occasions were never fulfilled.

Blaming the government for this situation, APJAC Amaravati leader Bopparaju Venkateswarlu lamented that it remained indifferent to their issues.

The leaders wanted the government to act on their demands before their agitation enters the second phase. They said it was unfortunate that the government has not fulfilled the promise to take a call on implementing the Pay Revision Commission (PRC) report by October end.

They submitted a five-page notice listing out the agitation programmes. They told reporters that the Chief Secretary assured them that the issues would be addressed by December 7.

The associations said the government owed at least Rs 1,600 crore to employees in the form of provident fund, general life insurance, leave encashment, and other benefits.

Release of pending dearness allowance, regularisation of contract employees, abolition of contributory pension scheme, streamlining of employee health cards and hike in salaries of outsourced and other contractual staff are among the key demands of the employees’ associations.

The leaders said though the PRC submitted its report more than three years ago, the government has not done anything except giving 27 per cent interim relief.

They found fault with the government for not even giving them the PRC report. They made it clear that the recommendations of the PRC should not be diluted and the employees should get a revision of 55 per cent.

They also took exception to certain remarks made by Finance Minister Buggana Rajendranath Reddy and alleged that he is trying to create a wedge between the government and the employees. They said Reddy never discussed the PRC report with them though it has been the tradition that the Finance Minister discuss the issue with the employees.

As per the agitation programme submitted to the government, all employees would attend work sporting black badges from December 7 to 9 in all offices.

Lunch hour demonstration will be held on December 10. Protest rallies will be organised in all talukas and revenue divisions on December 13. Dharnas will be staged across the state on December 16 and in all district headquarters on December 21.

The leaders also announced that regional conferences of employees will be held at four places including Visakhapatnam, Tirupati and Eluru from December 27 to January 1.