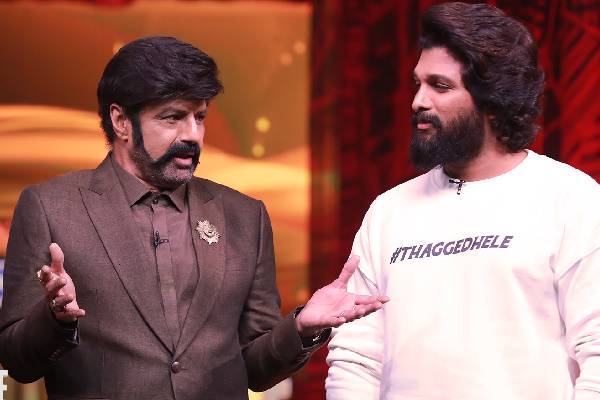 Nandamuri Balakrishna’s celebrity show Unstoppable is a smashing hit and the Tollywood audience are thrilled with the energy of Balayya. Stylish Star Allu Arjun along with Sukumar and Rashmika graced the show that is now streaming on Aha. As predicted, Balakrishna dominated the show and his mannerisms as Pushpa are the highlight. Sukumar said that his confusion is his major weakness after which Balayya said that he has enough clarity and they can complete a project in three months if teamed up.

After Allu Arjun arrived, Balayya said that he and Sukumar are teaming up after Pushpa 2 and they would complete the film in just three months. Allu Arjun replied with a smile saying “Actors like you should work with Sukumar to keep an end to his confusion”. Soon, Balakrishna announced that his film will Sukumar will start for Dasara and will be completed by Christmas. The film will release for Sankranthi. Balakrishna shaking leg with Rashmika for a song from Pushpa is one of the major highlights of the episode.