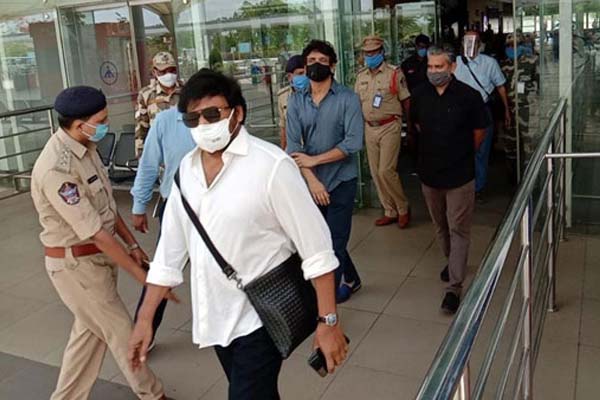 A group of farmers gathered outside the guesthouse where the film industry biggies were housed to put forth their concerns over three capitals proposals of the Jagan government. At around 2.30 pm, when the film industry delegation left the guesthouse, the farmers tried to meet the stars they patronised for years. However, the film stars drove past the farmers without as much acknowledging their presence.

The farmers were deeply hurt as the Mercs and Audis drove past them. Talking to the media, the protesting farmers questioned why the film industry was silent on the government’s move to shift Amaravati. They demanded that the film industry extend its support to the cause and condemned Chiranjeevi for supporting the Jagan’s three capitals move.

Seven members of the Telugu film industry, including actors Chiranjeevi, Nagarjuna, director S S Rajamouli, producers Daggubati Suresh Babu, Dil Raju, C Kalyan and Telugu Film Chamber secretary K L Damodar Prasad, on Tuesday met Jagan at his Tadepalli camp office. “Actors and filmmakers who show appreciation for farmers on screen should come out on the streets of Amaravati and support us. The Telugu film industry should respond to our problems,” a farmer said. Student leaders and farmers held placards ‘Save Amaravati’ ‘One City, One Capital’ and raised slogans such as “Be real heroes, support Amaravati.” Some of them said that if the need arose, they would not hesitate to enforce a ban on screening their films in Andhra Pradesh.

The protests of farmers in capital Amaravati reached the 174th day on Tuesday demanding that the State government withdraw the three capitals proposal. Despite the nationwide Covid-19 lockdown, the farmers in the region continued their peaceful protests at their homes in the capital villages. “The film industry is ignoring the farmers’ protest by not supporting us though we have been agitating for the last 170 days. The farmers came forward and gave more than 35,000 acres for constructing the new capital for the State in Amaravati. We bought movie tickets, considered you as our heroes, our gods. Is this how they ignore us? They need our lands to build studios, but will not stop for a minute to talk to us,” said another farmer, visibly distrubed.