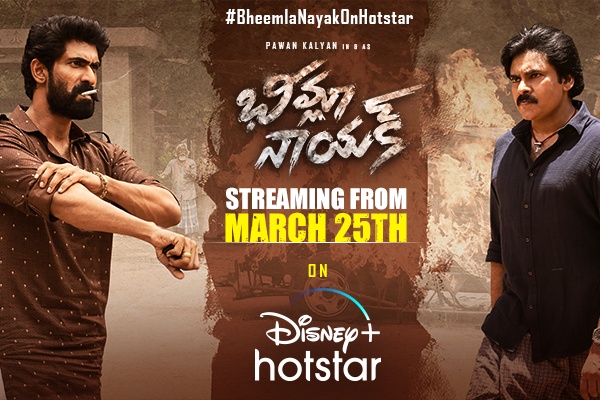 “Power Star”, one of the most esteemed titles ever given to a star, is looked upon as an emotion, and celebrated like a festival among the masses. The grandeur gets even more intense whenever Pawan Kalyan’s movie takes over the silver screen, especially when it is bound to be a record-breaking blockbuster film.

The beloved OTT platform, Disney Plus Hotstar is ready to provide an unforgettable experience to the audience as it plans to stream the sensational film “Bheemla Nayak” for them.

The film once again proves that the “Power Star” image has no bounds. It is a film that has managed to elevate Power Star to new heights while also exceeding fans’ expectations. The film also stars the most adored villains of all time, Rana in a role that is new and beautifully written.

Adding to the pros, Trivikram’s skilled writing has proven to be the backbone of the film. Each and every dialogue has garnered whistles and cheers from the audience and rightly so. The dialogues and the dialogue delivery were equally powerful and were complementing each other. As a cherry on the top, Thaman’s music is incredible, to say the least.

When a unique story is portrayed by phenomenal stars like him, it becomes magic. “Disney Plus Hotstar” will begin streaming Bheemla Nayak on March 25th at 12:00 a.m.