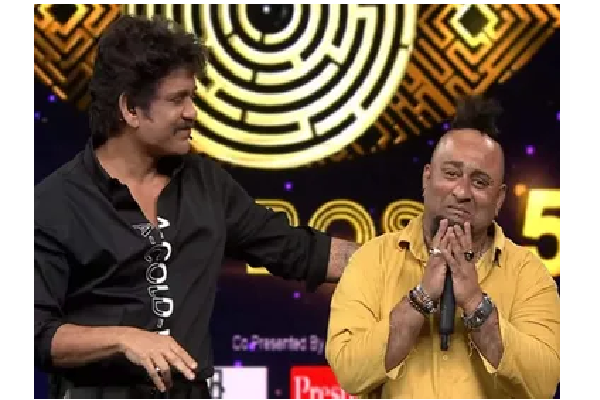 In Bigg boss house, usually weekend episodes are filled with fun. But sometimes host had to correct the mistakes done by the housemates. In the latest episode, Nagarjuna bashed most of the housemates for some reason or other. Also there was a twist at the end of the episode.

Nagarjuna started the episode by correcting the mistakes of the housemates. One of the biggest mistakes that happened in the house this week is the damage done to the house property by Lobo and Swetha during the task on the advice of Ravi. Nagarjuna reprimanded Lobo for blindly following the advice of Ravi. Swetha cried while talking to Nagarjuna and shifted blame on to Ravi. Ravi tried to defend himself in many ways but in vain. He dragged the issue by saying the cotton in the cushions and toy is same but Nagarjuna proved he is wrong.

Nagarjuna reprimanded Sriram for making derogatory comments on actors in general despite being actor himself. He reprimanded Siri and Kajal for getting disqualified as coordinators. He appreciated Sunny and Shanmukh for playing the game nicely.

Anne told Lobo name and said he is depending on others. Swetha too named Lobo and gave same reason. Siri also gave Lobo name for blindly believing Ravi. Shanmukh too gave the same name and same reason. Sriram told Ravi name but added he is a tough contender for him. Ravi named Kajal.

After coming onto stage he recalled his poor background from where he came. After interacting with the housemates he was about to leave and that is when Nagarjuna announced that he is not leaving the house. Lobo got very emotional after knowing this. Nagarjuna asked him to go to secret room.

We need to wait and see who will leave the house this weekend.