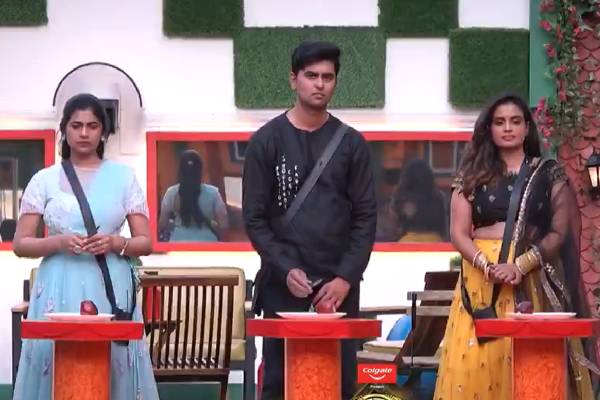 Social media sensation Sarayu was the first contestant to be eliminated from the house this season. Though many thought Jessie will leave this week, Bigg Boss gave a twist to this. Details as follows.

Sarayu is very well known artiste to netizens who follow Telugu bold content on social media. Several of her videos have more than 1 crore views on YouTube. If only 10% of those who followed her on social media voted for her , she would have continued for several weeks in the house. Though she does bold content videos on social media, she is well educated and has experience in corporate world. She is not only an actress but also personality development trainer. She acted in movies also .

As part of the task given by Nagarjuna, she selected Sweta, Manas Priyanka, Vishwa and Hamida as best persons in the house. She selected Siri, Sunny, Lahari, Shanmukh as worst players. She pointed out Sunny’s ego and his grudge on her. She also rightly pointed out Lahari’s arrogant tone. She revealed secret understanding between Siri and Shanmukh.

However, there is no big bomb task.

Sarayu was very confident when she joined the house. However, she could not mingle with anyone in the house except Vishwa. In fact Vishwa was in tears when she got eliminated. Despite her image that she is daring and dashing, she couldn’t portray the same image in the house and at times appeared confused in which stand to take. Bigg Boss makers also didn’t telecast much footage of her.

Had she been given an opportunity to play a skit or do a dance in this week, she would have proved herself and continued for more weeks in the house. It is unfortunate that she didn’t get a single chance to prove herself in the house despite being talented. Another bad luck for her is that there are many other contestants like Uma who irritated audience a lot the week but such contestants were not in the nominations this week.

Was Jessie saved by Bigg Boss?

There’s is another debate whether Bigg Boss intentionally saved Jessie and sent Sarayu out. Jessie is meek and behaving immatured. His rude behaviour also not liked by many. But it seems makers of Bigg Boss telecast more footage of him and projected him in such a way that he gets sympathy. Sarayu didn’t get even half of the footage what Jessie got.

Anyway it’s end of road for Sarayu in Bigg Boss house. But the show helped her to crossover from social media to mainstream media. If she plans well to utilise the recognition she got in mainstream, she can definitely have a better future.