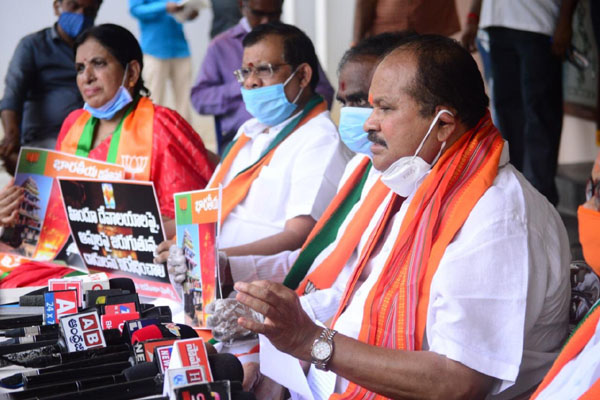 Jana Sena, the BJP’s political ally in Andhra Pradesh, also took part in the one hour protest sit-in. Rajya Sabha MP G V L Narasimha Rao and national secretary and co-incharge of the party’s AP affairs Sunil Deodhar also took part in the protest and condemned the government for its negligent attitude and non-serious approach in dealing with the issue.

The BJP leaders said there has been a growing attack on Hindu temples and their assets across the state ever since the YSRCP rode to power. Sunil Deodhar, demanded that the government immediately release the party leaders who were kept under house arrest in East Godavari district. On Tuesday, the police arrested more than 50 protesters who descended on Antarvedi village to demonstrate against the chariot blaze. G V L Narasimha Rao alleged that the YSRCP government ignored attacks on 15 temples in the state. He also accused the previous Telugu Desam Party (TDP) government of demolishing 17 temples in Vijayawada.