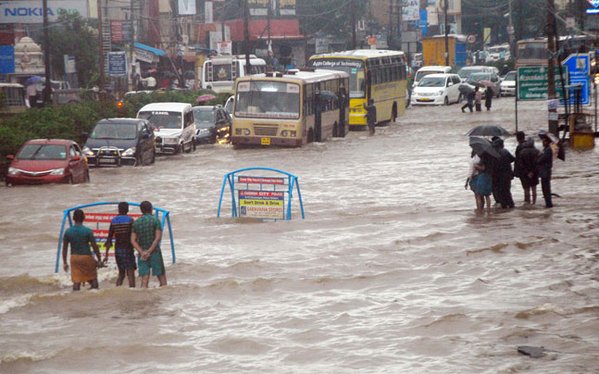 In the worst ever crisis that hit the coastal Tamil Nadu following unprecedented rains and floods, life has come to a grinding halt in Chennai. Large parts of the capital city and other areas of the coastal Tamil Nadu have got submerged in the flood waters. Water level at several lakes and dams has gone above the danger level mark. And the weather department has predicted more rains in the coming days, creating panic among the residents India’s southern metropolitan city.

The incessant rain have broken the 1918 record of 108.8 cm rain on a single day. Met office recorded 119.73 cm rain on November 30 which is said to be responsible for the floods.The weather officer sources said rain clouds with a radius of 100 km have surrounded Chennai and the heavy rain is likely to continue till Thursday with same intensity.

Everywhere the rescue teams are seen fully engaged helping the people stranded in the floods. Communications have got disrupted. Dozens of trains have been canceled and the airport has been closed due to the floods in Adayar river, until further orders. The Tamil Nadu government has declared holiday for schools and colleges while most of all the factories and offices too closed. According to official sources on Tuesday noon, power supply was suspended in almost 60% of the city locations. As the water level is increasing, several hospitals stopped functioning. Army and Air Force have been summoned for rescue work and distribution of food packets at suburban Tambaram and Oorapakkam and in the areas inundated in the rain water. Ships of the Navy and Coast Guard are on standby, officials said. Expert Naval divers and inflatable boats have been deployed at Adyar and Kotturpuram areas to help marooned citizens.
Though the respite early in morning gave hope for residents and rescue agencies, rain water showed little signs of receding as the Adyar river continued to swell following discharge of excess water from Chembarambakkam reservoir as well as yesterday’s heavy downpour. Discharge from the reservoir touched a record 35,000 cusecs.

What worried people was water that was gushing over the Maraimalaiadiglar bridge at the busy Saidapet junction, prompting officials to close the key facility as water nearly touched the nearby railway track between Guindy and Saidapet stations. Due the sudden disruption of train and bus services people in groups are seen walking on the railway track to reach their places in the city. The life has gone terribly haywire with phone network—both mobile and fixed lines–are out of service for most of the day. People complained that ATMs are also hit. Flood warnings have already issued and thousands of people have been shifted from homes after major lakes in the city vicinity have been breached and flooded residential areas in the southern suburbs. Water from Guduvanchery , Urapakkam, Perungalathur, Padappai, Mannivakkam and Adhanur lakes had entered residential areas by Tuesday night.