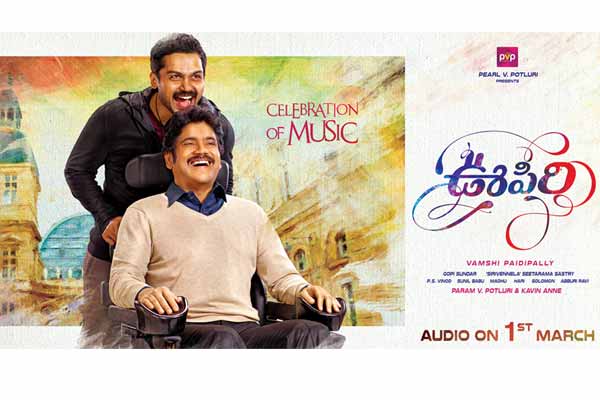 Oopiri is an emotional bilingual drama which features Nagarjuna, Karthi and Tamannaah in the lead roles. The film is an official remake of French film ‘The Intouchables’. The story of the film has been slightly tweaked to suit the Telugu flavour. The shoot has been wrapped up recently and the film is gearing up to hit the screens on March 25th.

Nagarjuna will be seen as a quadriplegic patient and Karthi plays his affectionate care taker in the film. Telugu360 has exclusively learnt that the emotional content in the film will pull heartstrings of the audience. The climax episode has been executed perfectly well and this part will be one of the major highlights in the film.

A close source to the unit revealed that Nagarjuna got emotional after watching the final edit and thanked Vamshi Paidipalli for narrating the film in a beautiful way. The teaser and posters impressed the audience big-time and increased the hype on the film.
Gopi Sundar composed the tunes and the audio launch will take place this Sunday. PVP Cinema banner has produced this bilingual film.