AP Opposition Leader N Chandrababu Naidu has said that in the first one year of his rule, Chief Minister YS Jaganmohan Reddy has only exhibited his expertise in conspiracies, misinformation, propaganda, faction politics and destructive tendencies instead of providing good governance to the people. The unstable state of the CM was proving to be destructive and detrimental to the overall interests of AP people. Jagan Reddy was treading the same terrible path that his grandfather Raja Reddy had chosen to follow in his time. Mr. Naidu held an online meeting with senior leader and people’s representatives of the party here. He said that CM Jaganmohan Reddy was behaving like a psycho bent on harming the state and its people. Because of such psycho-like, unstable activities only that his grandfather Raja Reddy was banished from his ancestral village which was why he had to take refuge in Pulivendula in those days. The ruling party harassment and atrocities were reminiscent of the activities of rakshasas and demons in the past. CM has no respect for the Constitution or rule of law. Even the media was under attack these days.

Expressing concern over rising Coronavirus cases in AP, Mr. Naidu blamed the YSRCP’s failure for the worsening epidemic situation in the state at a time when the country as a whole was improving far better. India reported 8.78 per cent cases per day during lockdown 3.0 which was lower when compared with 14.3 per cent during lockdown 2.0. But, AP situation turned worse because of irresponsible crowd based meetings held by the ruling party leaders in the form of tractor rallies, flower showerings and public meetings.

Mr. Naidu deplored that one year was completed in power but the ruling party has not completed one single irrigation project nor dug up one single pail of soil from any canal till now. The TDP brought water from Pothireddypadu to Rayalaseema villages and completed Muchumarri lift scheme successfully. Over Rs. 490 Cr compensation was given to Gandikota evacuees during TDP regime, which also started Telugu Ganga, Galeru Nagari and Handri Neeva projects. In five years, TDP completed 23 projects and provided irrigation to 32 lakh acres. YSRCP told the Centre that 70 per cent Polavaram works were completed but now it was talking differently which showed its bankruptcy.

The TDP Chief said that prior to elections, Jagan Reddy warned that AP and Telangana would turn into bitter enemies like India and Pakistan if Telangana was allowed to construct Kaleswaram project. After coming to power, the CM went and broke a coconut at the inauguration of Kaleswaram project. Jagan Reddy praised KCR for allowing digging of canals of AP project on Telangana soil. After a few months now, the same AP CM was now acting a different drama on irrigation projects. Jagan Reddy was stooping to any level to divert the attention of the people from burning issues of the state. 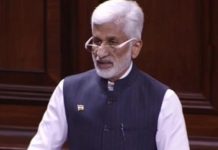