Shoot and post-production works Pelli SandaD are over and the film’s team have unveiled an impressive teaser.

Running for 50 seconds, the teaser sets the stage for the movie. It is a colourful collage of varied emotions- love, family sentiments and fun etc.

The makers, it is said, are very happy with the way the movie including the songs have taken shape and are planning to release the film either on September 24 or October 1.

Starring Roshan Meka and Sreeleela in lead roles, Pelli SandaD, directed by Gowri Ronanki, is a sequel to the 1996 blockbuster directed by Raghavendra Rao. 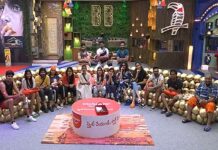