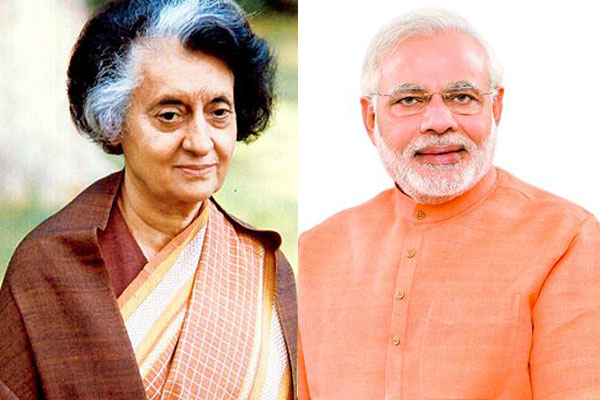 A wise man, the saying goes, learns more from enemies than from friends. It seems to have happened in the case of Prime Minister Narendr Modi also, if one has to believe BJP senior leader and in-charge of Andhra Pradesh affairs Sidhartha Nath Singh. Sigh was in Vijayawada yesterday along with Pon Radhakrishnan, union minister for transport and shipping.

State BJP had organized a party workers’ meeting on the occasion of senior central leaders’ visit to Vijayawada. However, both bungled in their interaction with party leaders. While Sidharth revealed a closely guarded party secrete about the origins of Prime Minister Narendra Modi winning mantra, union shipping minister exhorted party workers to ensure that the BJP comes to power in the next elections in 2019 in Andhra Pradesh.

Singh compared Narendra Modi’s catch-word “Sab ke saath, Sab ke vikas” with historic and most successful slogan of Indira Gandhi “garibi hatao”. Without such a discussion at the party level, he could not have compared Modi with BJP’s arch rival Indira Gandhi so openly and lauded it as a success story of slogan. It clearly indicates, where Modi had drawn his inspiration from for his slogan.
In 1969, Sidhrath Nath Singh said, when Congress split Indira Gandhi had to go the people against the party stalwarts and wean away the people from the influence of senior leaders who were well-known in their region. ” She invented a slogan to draw the attention of the people. She said,’ woh log kahrahahe hai Indira hatao. My Kahrahahun garibi hatao’.”

Singh said the worked wonders. The garibi hatao had become a magical chant. Modi wanted a more powerful slogan to win the hearts of the people.” Modi Slogan, sab ke saath, sab ke vikas’ is far more powerful than that of Indira Gandhi’s 1969 slogan,” he said. He asked the party workers present in the meeting to explain the meaning and importance of the slogan to the people. ” The slogan which covers all schemes of Modi government is meant to for the welfare people,” he said.

Now have a look at Pon Radhakrishnan’s utterance.

Modi is determined to conquer the every nook and corner of India with his charisma. In 2014 His juggernaut was halted in many places- at some places like Andhra the party Modi survived because of TDP. In Telangana, Modi faded out in the face T-sentiment. But, the urge to annex the Telugu lands to his saffron empire is lying dormant in his heart. Realization of this dream is not possible in foreseeable future as TDP is also conscious of danger Modi poses to the party if BJP is given free hand in Andhra. But, this irrepressible urge to win the state some time in future is being made public by leaders from outside the state. Pon Radhakrishnan revealed general road map of Modi’s long march.
Talking to party workers in Vijayawada, the Tamil member of team-Modi called upon to the workers to ensure that the party assumes office in 2019. The statement, though made by an outsider, has the potential to annoy the TDP as the BJP could enter the assembly only at the help extended by the TDP.
Realizing the damage the minister caused to the party, Sidhartha Nath Singh, tried interpret it in a harmless way.”The meaning is that the party should emerge as the single largest party in Andhra Pradesh. There was nothing wrong if the BJP wants to get stronger as a party,” he said.

He also added that the BJP respects coalition dharma. It doen’t mean that BJP should remain where it is now. We will continue to expand our base while respecting the coalition dharma. It is our right,” he said. Later, it was the turn of Haribabu, president of AP party, to conduct ‘Swatchh BJP’ for the sake of Big Boss TDP. “Our leader’s intention was that the BJP should expand its base, but not at the cost of our partner BJP. It will be like this, if BJP grew, it would also benefit the BJP-TDP coalition in AP,” Haribabu said.

Given the invisible tension between Moid and Naidu, and BJP and TDP, with respect to extending central assistance to Andhra Pradesh, adhakrishnan’s utterance appears to carry deeper meaning.