Switch to: తెలుగు
Home Movies Movie News Did Maestro To Prove Myself As An Actor: Nithin 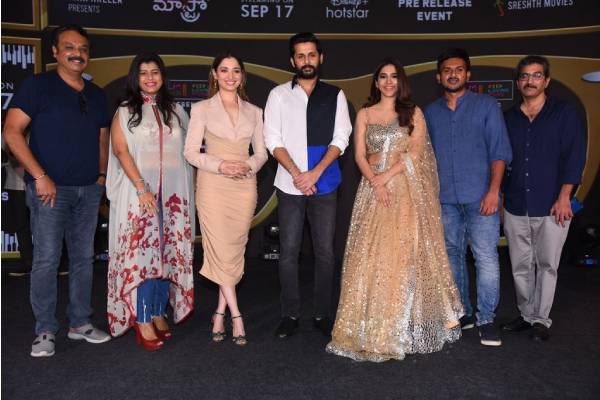 Nithin’s Maestro – the official Telugu Remake of Hindi Blockbuster, Andhadhun is releasing directly on Disney plus Hotstar on September 17th. The Pre-release event of the film has happened in Hyderabad.

Speaking at the event, Nithin said,” I am initially skeptical about doing a remake but I did the film because I wanted to prove myself as an actor. Doing a remake is a difficult job inviting criticism even if the director makes changes or even if he makes the film as is. Merlapaka Gandhi made the film for Telugu audience. We changed the love track a bit and increased the entertainment quotient while retaining the sole of Andhadhun. I hope everyone will enjoy the film just like the original film. Watch the film on Hotstar on 17th and you will enjoy it for sure”.

Tamannah who plays a surprising character looked so exciting. “Andhadhun is one film that should be remade in every language. I should appreciate Nithin for doing this film. Audience give us stardom but it is in our hands to prove ourselves as an actor. I thank Nithin and Gandhi for giving me this opportunity,” she said.

iSmart beauty Nabha Natesh said,” One should be lucky to do the remake of Andhadhun. I thank Nithin and Merlapaka Gandhi for this. Nithin is a very energetic actor. His dedication is next level. We are coming on OTT to offer a safe watch to everyone. I hope you all enjoy the film with your family”.