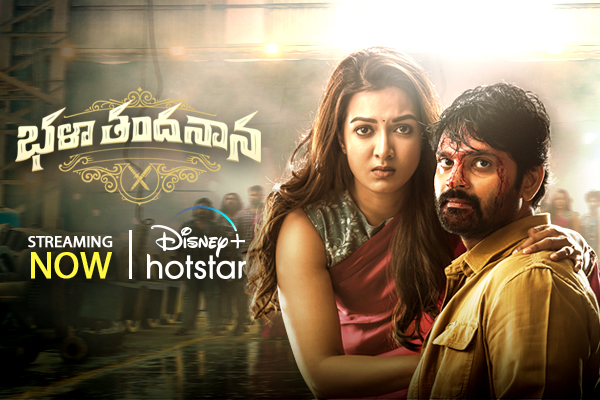 From the makers of Oohalu Gusagusalaade and Eega, comes yet another gem of a film, Bhala Thandhanana. Disney Plus Hotstar has started streaming the action thriller expertly written by Srikanth Vissa and directed by Chaitanya Dantuluri.

The Sree Vishnu and Catherine Teresa starrer is a crime thriller drama with a good pinch of comedy and emotional suspense in it. The Telugu audience has been entertained by action thrillers and suspenseful stories before. We have also teared up alongside the leads listening to their emotional dialogues and have also fallen in love with the romantic storylines before. But this one is special, as it comes to the screens packing all the elements.

While there have been movies which put us on the edge of our seats, Bhala Thandhanana is sure to win hearts and imprint on our minds what an absolute star Sree Vishnu is. The movie also stars Posani Krishna Murali and Garuda Raam a.k.a Ramachandra Raju Srinivas Reddy Satya in vital roles.

Backed by Manisharma’s mesmerising music, “Bhala Thandhanana” hands down is a complete entertainer for the whole family with unexpected twists, unpredictable turns, and interesting elements.

Sree Vishnu, known for his unusual choices of films and eclectic taste in scripts has surprised the audience with his mass avatar in the film’s trailer. Catherine Teresa, the female lead can be seen donning the hat of an investigative journalist whose life revolves around complex cases that have her up on her feet all the time.

What happens when the innocent looking Chandu meets the scrutinising gaze of Sasirekha? Is there something more to him than what meets the eye? Well, watch the movie to know what happens.

Spoiler Alert: You will never be able to correctly predict what is going to happen next!

So do not miss out on the delightful ride that Bhala Thandhanana is.