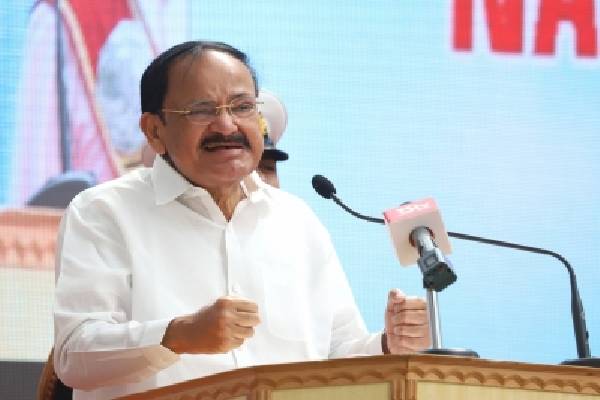 Speaking at the centenary celebrations of former Parliamentarians and educationist Nookala Narotham Reddy, Naidu opined that the recent incidents in certain state legislatures were disheartening. Stating that “disruption means derailing debate and derailing democracy and the nation”, he cautioned that people will get disillusioned if the same trend continues.

Naidu reminded that conduct in Parliament and legislatures should be in pursuit of the 3 D’s — ‘Discuss, Debate and Decide’. He said that at no point the House should become a platform for disruption. “Obstructing the House only hurts the cause of public interest,” he added.

Highlighting the exemplar quality of debates when Narotham Reddy took part in the Parliament, Naidu said that representatives’ actions in the legislatures should reflect people’s aspirations.

The Vice President also expressed his concern over the declining attendance of parliamentarians and legislators in respective Houses. He stressed upon the need for them to be regular and contribute meaningfully to the discussion.

The Vice President further said that the criticism by the members should be constructive and they should not resort to personal attacks against others. Naidu appealed to the people to elect representatives who possess the 4Cs – ‘Calibre, Conduct, Capacity and Character’.

Emphasising the role of education in inculcating moral values, patriotism and probity in public life, Naidu said that education should produce “well rounded holistic individuals”. Pointing to India’s demographic dividend, he said that no other nation has this kind of advantage and stressed the need to fully leverage it for the country’s progress. In this context, he called for upskilling the younger generations in tune with the 21st century needs. He advised the students to upgrade themselves with the latest technological developments.

Naidu also suggested that in the spirit of New Education Policy, institutes should restructure themselves and bring in a holistic and multidisciplinary approach to education. “The policy also targets at reducing the burden of curriculum and attempts to bring about a comprehensive development in the young student, matching international standards,” he added.

Recalling India’s glorious past in the field of education when students from other countries used to come to study at reputed institutions like Nalanda and Takshashila, the Vice President stressed the need to regain the past glory.

In his speech, the Vice President praised late Narotham Reddy for his invaluable contributions to the education sector – as an administrator in Osmania University, through his support for better pay scales for faculty and by arguing for upgrading university’s infrastructure and standards. He said that these kinds of celebrations are meant to remind and inspire the younger generation about the contributions made by great people like Narotham Reddy in nation building.