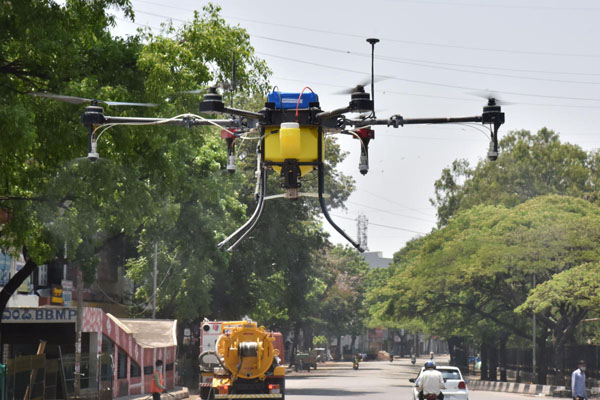 The medical and health officials introduced aerial spray of sodium hypochlorite disinfectant in Vijayawada city to fight COVID-19. To begin with, this is being carried out by using drones at the general hospital premises. Depending on the results, the use of drones will be extended immediately to the high risk zones in the city limits.

The municipal authorities have already begun land spray of sodium hypochlorite and bleaching powder in parks and public places in the city. But, the general public are scared of places like general hospital where the COVID suspects and patients are being treated. Moreover, the residents are also frightened in places where +ve patients are in home isolation.

Following this, the government has decided to increase anti-virus operations. The extensive spraying of sodium hypochlorite is expected to give better results. Aerial spray is expected to cover larger areas in less time. The drones are going to be used in some localities near Benz Circle where cases of infected foreign returnees are reported recently.