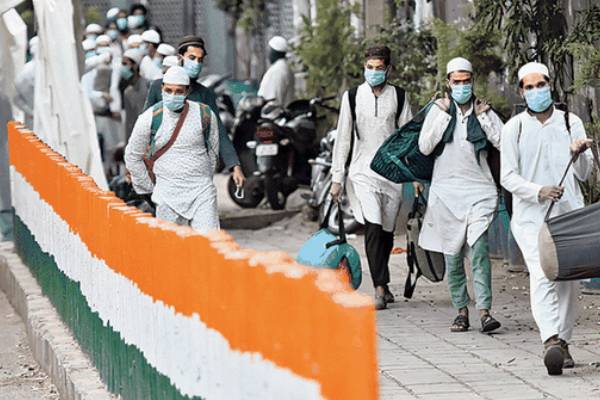 As the number of corona cases continues to rise in India with each passing day, the Hazrat Nizamuddin dargah and Markaz Masjid in South Delhi has come under sharp surveillance of the Arvind Kejriwal-led Delhi government. Drones have been deployed by the government to keep a vigil on the movements in and around the Nizamuddin area after more than 200 people with corona virus symptoms were shifted to different hospitals.

The Delhi police have cordoned off the area around the mosque in Nizamuddin, near the ‘dargah’ (shrine). The Nizamuddin area in South Delhi is being screened and tested for coronavirus in different hospitals amid worries that they may have been exposed to the infection at a religious gathering in Markaz Masjid that was attended by foreign nationals from Malaysia, Indonesia, Saudi Arabia and Kyrgyzstan. Cases of COVID-19 have surfaced in several States in persons linked to the Nizamuddin gathering, especially from Telangana and Andhra Pradesh.

In Telangana, more than 400 people (official figures) from across the state took part in the Tableegh Jamat which was held from March 13 to March 15 at Markaz Masjid. At least 186 people from Hyderabad, 26 persons from Medak, 25 from Mahbubnagar, 25 from Warangal, 21 from Nalgonda, 18 from Nizamabad, 15 from Khammam and 10 from Adilabad have attended the religious gathering which saw a large turnout of more than 8,000 people from various countries. At least 6 people died due to the corona virus. All the six who died in Telangana (2 in Gandhi Hospital, 1 in Apollo Hospital, 1 in Global Hosptital, 1 in Nizamabad, 1 in Gadwal) attended the ‘Tableegh Jamat’ in Markaz Masjid. Telangana chief minister’s office on Monday late night admitted six deaths due to Covid-19 outbreak among a group that had attended a religious prayer at Markaz in Nizamuddin area of Delhi during second week of this month.

The Telangana CMO had put out a notice assuring necessary medical assistance to people from the state who attended the gathering and all those who came in contact with the infected persons. The government has appealed to people seeking information about those who participated in Markaz prayers in Delhi or those who had contact with them after their return from Delhi.

In Karimnagar, a group of 10 Indonesians who attended the religious event at Nizamuddin mosque were tested positive for corona virus following which the Telangana government had put the district on high alert. According to reports, the Indonesians had travelled in coach number S9 of the AP Sampark Kranti Express (Train no: 12708), boarding it at Hazrat Nizamuddin railway station in Delhi on March 13 and alighting at Ramagundam in Telangana on March 14, before travelling to Karimnagar by road. The Indonesians were accompanied by three Indians and stayed for two days at a mosque near the Karimnagar Collectorate, before the first patient reported symptoms of coronavirus. Later, all the 10 Indonesians stayed for two days in Karimnagar and visited at least 3 mosques. A 23-year-old Telangana man who was in contact with the group of Indonesians too was tested positive for the corona virus. The three areas which were visited by the Indonesian group were put on high alert by the Telangana government. Now, both the governments are investigating how many people came in contact with those who contracted corona virus and returned to both the two states.

Although it was not clear how many people from Andhra Pradesh attended the religious gathering, at least 10 people who returned from Delhi to various districts of Andhra Pradesh after attending the Islamic evangelical event of Ijtema were tested positive for coronavirus. The AP government had put Guntur, Prakasam and Godavari districts on high alert and seem to be worried how many more individuals came in contact with these 10 infected persons.

At least 10 people who returned to various parts of Andhra Pradesh from New Delhi in different trains after attending the Islamic evangelical event of Ijtema were tested positive for coronavirus. The state administration now seems to be worried how many more came in contact with these 10 individuals who are from Guntur, Prakasam, West Godavari, East Godavari, Vizianagaram and Viskhapatnam.

Guntur had been put on a high alert after a 52-year-old man who attended the religious meeting at the Nizamuddin Mosque died on Monday. He travelled from Delhi to Vijayawada by the Duronto Express and went home by car to Guntur on March 19. He visited the hospital in Vijayawada on March 23 and his blood sample sent for examination tested positive. Similarly, a 60-year-old man from Prakasam attended the event in Delhi and was tested positive for corona in Chirala. He visited a mosque in Nawabpeta and also stayed with his son and daughter in law in Indira Nagar residence in Chirala. The state administration stated that all event participants and their close contacts will be placed under mandatory quarantine for 14 days.

While Telangana reported 75 positive cases of corona, Andhra Pradesh’s tally rose to 25. Both the state governments are now probing the Delhi angle to the increasing number of corona cases in Telangana and AP. Both the governments have now put their surveillance teams into action to trace and track all the people who visited Nizamuddin to attend the religious gathering and also get information on those who came in contact with those attended the evangelical event and tested positive for corona.