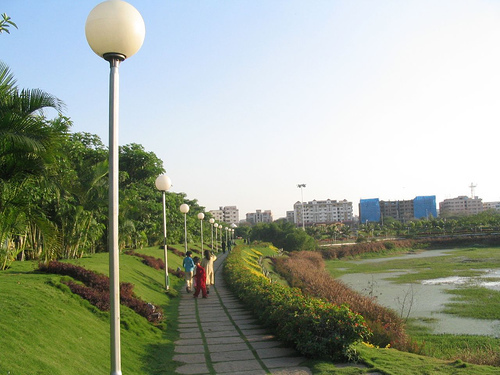 Andhra Pradesh government is  embarking on the development of national parks in every district headquarters on the lines of Kasu Brahmananda Reddy Park (KBR Park) located in Hyderabad.  All these parks will  be named after the towns there are located in and  total cost of the project is Rs 130 crore.

Ashwini Kumar Parida, special chief secretary, Environment and Forest & Science and Technology said each park would be developed in an extent of 300 acres. Talking to telugu360.com he said the foundation for the first park ‘Vijayawada Nagara Vanam” would be laid by chief minister N Chandrababu Naidu on July 17 in Vijayawada. Similarly, Parida said, the park that would come in Rajaumundry would be dedicated to Pushkaralu. By the time of next Pushkaralu, the park would grow into a massive and colorful Pushkara Vanam, he said.  On the availability of the lands, he  said, the forest land in the close proximity of the city would be taken to develop the ‘Nagara Vanam”

To inculcate green consciousness among the students, Andhra Pradesh government is setting up Andhra Pradesh Green Corps (APGC) on the lines of NCC and NSS. ” This is mandatory for all students studying  8, 9 and 10 classes in public and private schools,” he said adding that about 10 lakh students would be enrolled as volunteers. These students participate in “Green Andhra Pradesh program” and get certificates at the end of the academic year. Stating that the establishment of Green Corps  is first of its kind in India, the special chief secretary said, their activities would preserved in digitized format with the photos of students and pictures of their activities, can be accessed by all students across the state.