Allu Aravind between huge expectations announced his digital platform Aha. Though Allu Aravind was the final decision maker, he handed over the responsibilities of web series for various teams. After most of the shows received a lukewarm response, Allu Aravind got alerted. He started approaching top directors and Vamshi Paidipally, Maruthi, Nandini Reddy turned script co-ordinators for Aha. Successful producer Dil Raju is the latest one to join the list.

Raju will be finalizing the content and he is also in plans to produce web-based films for Aha. Dil Raju and Allu Aravind who are business partners in distribution decided to work together for some concept-based films and web series. Raju is currently in talks with various filmmakers for these projects. Allu Aravind and Dil Raju will produce several projects soon. 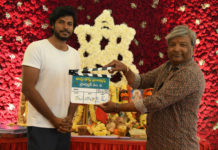