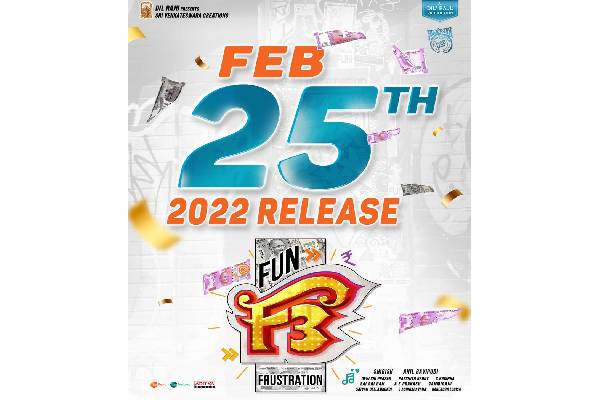 F2 happens to be one of the most successful films in Telugu cinema. The sequel for this hilarious entertainer titled F3 is getting ready. Anil Ravipudi is the director and Venkatesh, Varun Tej, Tamannaah and Mehreen are the lead actors. The makers initially wanted to release the film during Sankranthi 2022 but decided to avoid releasing this comic entertainer in a mad rush. The stake involved too is high as the budgets and the remunerations are increased for F3. Anil Ravipudi revealed that the entertainment quotient in F3 will be quite high when compared to F2.

The makers today announced that the film will hit the screens on February 25th, 2022. A major schedule of F3 was completed in Taj Falaknuma Palace in Hyderabad. The pending shoot will be completed by November. Dil Raju is the producer and Devi Sri Prasad is the music director. The film also has a list of top comedians playing crucial roles.

Lets Celebrate the Most Awaited Fun Franchise #F3Movie in cinemas from Feb 25th,2022.