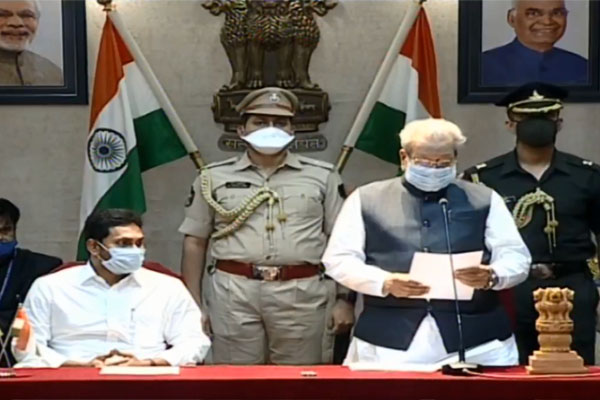 With an increasing number of his colleagues contracting the deadly virus, Chief Minister Y S Jagan Mohan Reddy perhaps for the first time was seen wearing a mask at the Raj Bhavan for the swearing-in ceremony of the two ministers who were inducted into his Cabinet on Wednesday.

The Chief Minister and many of his legislators attended the recently held two-day Assembly session without wearing masks.

Although the state government had announced a fine of Rs 1,000 for not wearing masks in urban areas and Rs 500 in rural areas, the public representatives, including the Chief Minister, were seldom seen wearing a face mask.

However, the Chief Minister seems to have jolted out of his stupor with an increasing number of his colleagues contracting Covid-19 including his second-in-command Vijayasai Reddy. After Vijayasai Reddy and Ambati Rambabu testing positive for coronavirus, a worried Jagan was finally seen wearing a mask at the swearing-in ceremony of the two ministers at the Raj Bhavan.

The YSRCP leaders were blamed for being ‘Super Spreaders’ of the deadly virus with their irresponsible rallies and meetings since the day the pandemic outbreak in the state. The YSRCP leaders had often thrown caution to the wind even as the Opposition TDP had advised the ruling party leaders to wear face masks. As a matter of fact TDP president and former Chief Minister N Chandrababu Naidu and party general secretary Lokesh have urged Jaganmohan Reddy to lead by example and wear a facemask when in public. However, Jagan and his colleagues continued to appear in public meetings without a face mask.