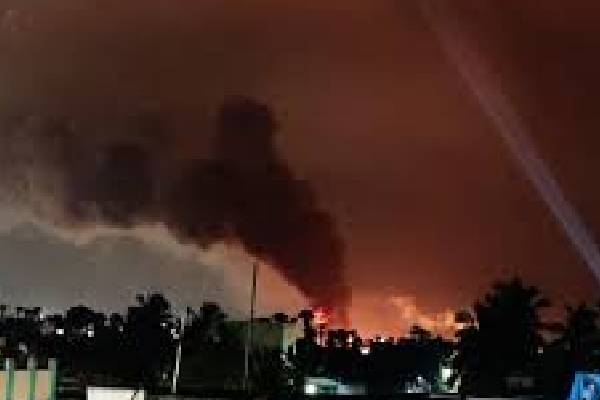 The Andhra Pradesh government on Tuesday constituted a four-member committee to probe the factors that led to the massive explosion at Visakha Solvents plant at Jawaharlal Nehru Pharma City in Parawada on the outskirts of Visakhapatnam on Monday night.

The explosion at Visakha Solvents plant at Jawaharlal Nehru Pharma City has left one dead and several others injured. The charred body of 40-year-old senior chemist K Srinivas Rao was found inside the plant. Four others were injured. They were admitted to a private hospital.

The midnight explosion in the plant was brought under control after at least 12 fire tenders were pressed into service to douse the flames. The fire reportedly started from the reactor and spread to other parts of the plant.

Taking a serious view on the issue, district collector Vinay Chand on Monday set up a four-member panel to investigate the causes that led to the explosion. The district collector said action will be initiated against the officials of the company once the probe report is submitted.

Meanwhile, the Parvada police has registered cases against the Visakha Solvents plant under Sections 338 and 340 of IPC.

Visakapatnam had witnessed a series of gas leaks and explosions in pharma and polymer plants. The Andhra Pradesh government had proposed to make Vizag as the executive capital of the state.

The latest Parawada incident is the second in less than a month. Earlier, two persons died and four injured after they inhaled benzimidazole vapours, which leaked at the Sainor Life Sciences Private Limited at JN Pharma City in Parawada on June 29. The two tragic incidents come close on the heels of LG Polymers styrene monomer vapour leak incident on May 7, in which at least 13 died and hundreds fell sick. All the three incidents occurred late at night leaving the residents of Visakhapatnam.jolted and terrified.

A high-power committee probe, chaired by Neerabh Prasad, Special Chief Secretary of the state forest department, nailed the management of the LG Polymers for several lapses including non-adherence of safety protocols and lack of timely emergency response measures. The probe report submitted to Chief Minister Y S Jagan Mohan Reddy stated that the design of the tank was faulty, lapses of the staff in temperature measurement and control, recirculation and refrigeration system among others. Following the report, at least 12 officials of the South Korea-based chemical company were arrested by the police on July 7.

Will Jagan resign? asks TDP after ‘no insider trading’ order