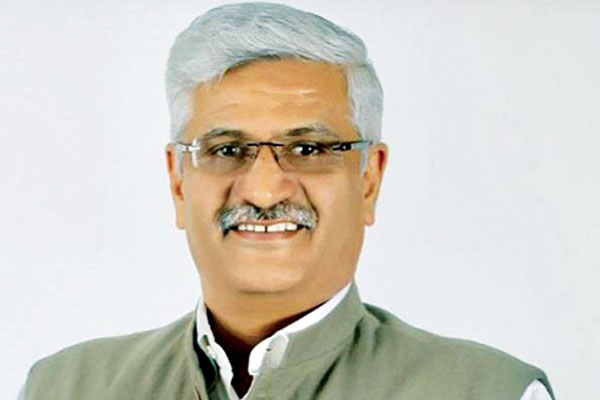 Jal Shakti Minister and Apex Council chairman Gajendra Singh Shekhawat was tested positive for Covid-19 on Thursday. He has been shifted to a hospital.

The Union Minister took to Twitter to inform about his health. “On getting some symptoms, I got the corona test done and my report came back positive. I am hospitalised on the advice of doctors. I request that those who have come in contact with me in the last days, isolate themselves and get themselves examined. May all of you be healthy and take care of yourself,” Shekhawat tweeted.

Already thr Chief Ministers of both the states K Chandrasekhar Rao and Jaganmohan Reddy have prepared their respective arguments to put forth before the Apex Council.

Telangana Chief Minister K Chandrashekhar Rao and his Andhra Pradesh counterpart Y S Jagan Mohan Reddy are gearing up to present their respective point of views on the river water sharing between the two states when they meet at the Apex Council on August 25.

Both the states have locked their horns over irrigation projects being taken up on Godavari and Krishna rivers. Rao, who stated that he will not compromise even a single drop of water, is preparing the argeuments put forward to safeguard the interests of his state people He had also held a review meeting to finalise the strategy to be adopted at the Apex Council meeting. The officials concerned are briefing the CM with comprehensive information on all the objections that the AP Government and Centre had put forth.

Armed with the information, the CM is likely to fiercely put forth his views and objections before the Apex Council meeting. He pointed out that there were no new projects in the Telangana state andthe projects approved in the united AP were redesigned to suit the needs of the Telangana and the projects are being executed in tune with the Bachawat Tribunal Award. It was also decided to strongly oppose and register objections over enhancing the capacity of Pothireddy Padu as well as the new Rayalaseema Lift Irrigation project taken by the AP government at the Apex Council meeting.

The CM made it clear that the so-called objections raised by AP Government and the Centre have no meaning and were baseless. The Telangana government has opposed the Andhra Pradesh government’s move go ahead with the Rayalaseema Lift Irrigation Scheme and also move to draw and utilise six to eight TMC of water per day from the Srisailam reservoir on Krishna River.

Jal Shakti Minister Gajendra Singh Shekhawat had recently written a letter advising the Chief Ministers of Telangana and Andhra Pradesh not to proceed with the construction of projects which have not been cleared by the agencies concerned such as the Central Water Commission (CWC). Jagan shot back. In a letter to Shekhawat, Jagan clarified that that the Rayalaseema project is being built with the objective of using the water that Andhra Pradesh receives in the summer as per the Reorganization Act.

At the same time, Jagan Reddy clarified to Shekhawat that Rayalaseema scheme was not a new project but just a part of the existing Pothireddypadu scheme.

Moreover, the AP Reorganisation Act 2014 has clearly laid down guidelines for taking up new irrigation projects strictly abiding by the related acts and guidelines so as to meet water needs of both the states.