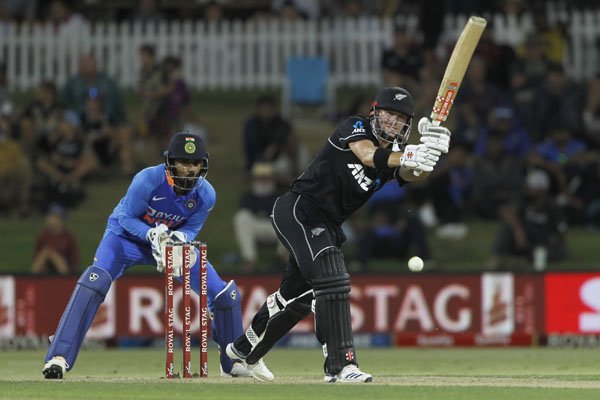 Colin de Grandhomme smashed an unbeaten 28-ball 58 as New Zealand crushed India by five wickets in the final ODI at the Bay Oval on Tuesday, thereby clinching the three-match series 3-0.

Grandhomme came in to bat when the Black Caps, chasing 297, were 220/4 at the end of 40 overs. The big-hitting all-rounder took the game by the scruff of the neck by taking a liking to Shardul Thakur who went for 83 runs in nine overs as he smacked six fours and three sixes during his stay at the crease.

Besides him, opener Henry Nicholls set the tone of the chase with a well-paced 80 off 103 balls (9×4) with contributions from Martin Guptill (66) and Tom Latham, who was unbeaten on 32 alongwith Grandhomme.

For India, Yuzvendra Chahal was the pick of the bowlers returning figures of 3/47.

For India, K.L. Rahul scored 112 but his effort went in vain in the end as India lost with 17 balls to spare.

In their chase, the hosts were off to a flying start as Guptill and Nicholls shared a 106-run stand before Chahal castled Guptill with a beautiful delivery.

Back leading the side after an injury layoff, Kane Williamson looked good to continue Kiwis’ domination but a lapse of concentration cost him his wicket as he whipped a Chahal delivery straight to midwicket where Mayank Agarwal took an easy catch.

From a position of strength, New Zealand suddenly looked in trouble after in-form Ross Taylor (12) was caught by Virat Kohli at short cover off Ravindra Jadeja and in the very next over, Nicholls was caught behind off Thakur.

Allrounder James Neesham joined the steady Latham in the middle but could not last long as he smacked a tossed up Chahal delivery straight to Kohli at mid-wicket.

Grandhomme then took over and sent Thakur to the cleaners with Latham supporting him from the other end.

Earlier, Rahul continued with his prolific run in the ongoing tour as he smashed a brilliant century to help India set a 297-run target.

While Rahul top scored with 112, Shreyas Iyer and Manish Pandey made significant contributions of 62 and 42.

Put into bat, India didn’t have a great start as they lost opener Mayank Agarwal (1) in the second over itself.

Kohli, who came in next, did try to steady India’s ship. However, while playing an upper-cut, he was caught at the third man boundary after scoring just 9.

Opener Prithvi Shaw didn’t let the fall of wickets get the better of him as he kept scoring boundaries and looked determined to play a big innings. However, just when things looked to be getting India’s way, Shaw lost his wicket as he was run-out after scoring 40 off 42 balls.

Rahul and Iyer then came to India’s rescue and shared a 100-run stand to bring the visitors back in the game.

Iyer, who had a 100 and fifty to his name in the first two matches, scored yet another half-century. However, after playing a well-compiled innings of 62, he was caught at mid-wicket by Grandhomme.

Pandey, who replaced Kedar Jadhav for the dead rubber, came out with positive intent right from the word go and stitched a 112-run partnership off 113 balls as India went past the 250-mark.

Rahul, who scored his fourth ODI ton, got out in the 47th over while trying to up the ante and was caught at long-off. Pandey (42 off 48) also got out the very next ball while trying to go for a maximum against Hamish Bennett.

Bennett was the pick of the New Zealand bowlers as he returned with figures of 4/64 from his 10 overs.