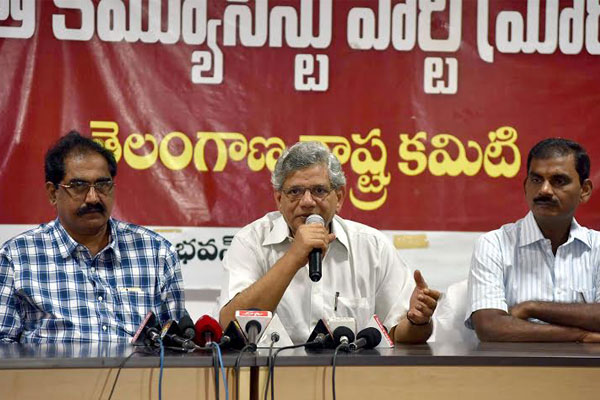 CPM general secretary Sitaram Yechury cautioned TRS government in Telangana not to create situation where Gujarat Patel like movement emerges in the new born state by pursuing anti-people policies. Yechuri, who was in Hyderabad, expressed dissatisfaction over the way chief minister government was functioning in Telagana. The CPM leader was obviously referring to the feeling of left out among the members of SC, ST, OBC and Minority groups.

“Telangana has got substantial population of SCs, STs, BCs and other minority communities. TRS government should fulfill the aspirations before discontentment erupts among these vast mass of marginalized section,” he said.

Yechuri , flanked by T-CPM secretary Tammineni Veerabhadram,said the agitation for OBC status by the Patel community had exposed chinks in the “Gujarat model” which Modi was attempting to thrust at national level.
“That a well-to-do community like Patidars hit the streets on agitation for reservations shows the the high degree of discontent among the people. This is clear indication to the fact that Gujarat model was faulty and not inclusive. It benefited only a few,” he said.

Yechuri alleged mismanagement of the Gujarat society by Gujarat government then by Modi and now by his predecessor. The Patidar anger in Gujarat should serve as a wake-up call to the KCR regime which had failed to live up to the expectation of the people, he warned.