The trailer of talented director Harish Shankar’s much awaited movie Valmiki is here and it has impressed the ‘mass content’ loving cinema fans big time. Mega fans are upbeat about Varun Tej’s menacing look in that rugged beard, as he stole the show.

However, the trailer of Valmiki has upset a set of fans who found that Harish Shankar has once again targeted a hero. As character artist Brahmaji is seen explaining mathematics to some pupils, he asks them about the formula(a+b)2 , to which another character tries to reply immediately. Reacting on this, Brahmaji says, “I’m not done yet”. That explains all the reasons as to why Mahesh fans got a bit hurt.

That happens to be a popular dialogue of Mahesh from Bharat Anu Nenu movie from the iconic press meet scene. A character artist using it for fun is not going well with fans of Superstar now, as they feel Harish might have threatened more inside the film. This is not the first time Harish rubbed the wrong side of some celeb’s fans, as he targeted actor Rajasekhar in Gabbar Singh and Boyapati Sreenu in Ramayya Vastavayya movie similarly.

S Thaman on board for Mahesh Babu’s Next

US box office : Ala.. extends its strong run, SLN slows down 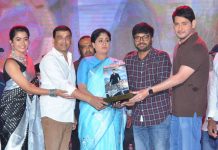