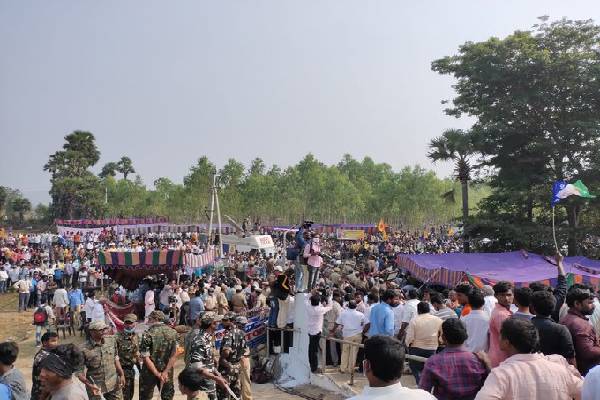 Ramatheertham temple area turned into a battle zone due to gathering of huge crowds there. Activists of YCP, TDP, BJP and Hindu organisations thronged the temple. Hindu devotees raised slogans Jai Sriram and protested against the YCP leaders for creating disturbances at the temple.

The BJP leaders turned angry at the police for blocking them from going to the temple while allowing YCP MP Vijay Sai Reddy and his party leaders. Unexpectedly, very huge crowds gathered at the temple in view of the visit of TDP chief Chandrababu Naidu. TDP activists kept raising slogans in favour of Mr. Naidu and against Vijay Sai Reddy visit.

At one time, the TDP activists turned angry and pelted chappals and stones at the Vijay Sai Reddy convoy. A windowpane was broken in the incident. The police found it difficult to manage the crowd. The arrival of Vijay Sai Reddy simultaneously with Mr. Naidu created disturbances at the temple premises.

The police also did not give permission to the BJP and Hindu leaders to go to the temple in view of Vijay Sai’s visit. They raised slogans in protest against the YCP on the occasion.