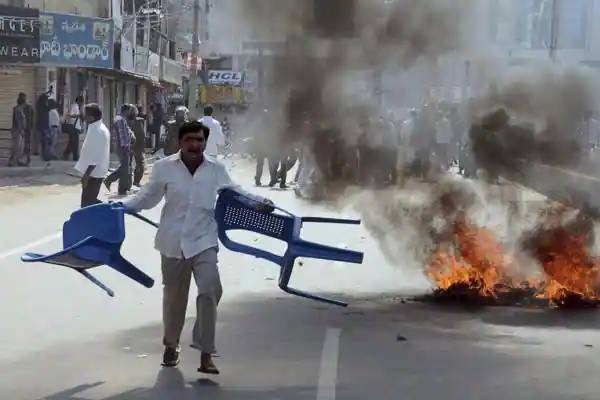 Five days after Amalapuram was rocked by violence over the proposal to rename Konaseema district as Dr B. R. Ambedkar, internet service remained snapped in the town and some other parts of the district.

The internet service disconnected as a precautionary measure after Tuesday’s violence to stop spread of false messages on social media has not been restored causing severe inconvenience to people.

During the large-scale violence that rocked the town on May 24 during a protest called by Konaseema Parirakshana Samiti, residences of a state minister and an MLA were set afire and dozens of people including police personnel were injured.

On the suggestion of district Superintendent of Police K.S.S.V. Subba Reddy, District Collector Himanshu Shukla wrote to the State government for disconnecting internet till normalcy was restored in Amalapuram, the headquarters of Konaseema district.

With the Dalit Hakkula Porata Samithi (DHPS) deciding to hold Maha Dharna and a public meeting at Amalapuram on June 2 demanding that Konaseema district be named after B. R. Ambedkar, the internet services are not likely to be restored soon.

Police have beefed up security in the district headquarters town by deploying a huge force.

This is causing severe hardships to people in many parts of the district. Banking services, withdrawal of money from ATMs and digital transactions have been hit badly.

Updation of records under Arogyasri and MGNREGS has come to a standstill.

Desperate to use internet services, people are seen gathering in areas where they are receiving internet signals. They are heading towards areas along Godavari river and even crossing island villages in neighbouring West Godavari district.

During investigation, police found that trouble-makers sent anti-social messages through at least 20 WhatsApp groups for four days before the violence.

Out of 100 suspects, police have arrested 19 while 27 others are in custody.

Preliminary investigation by the police has revealed that two dominant castes in the district — Kapu and Setti Balija — came together to oppose the move to rename Konaseema district after Ambedkar.

According to police, the coming together of these communities intensified the protests against the renaming of the district as more number of people participated in the agitation.

The Konaseema district was carved out from East Godavari with Amalapuram as its headquarters.

It was one of the 13 districts created on April 4, taking the total number of districts in the state to 26.

The state government on May 18 issued a notification inviting objections and suggestions on the proposal to rename the Konaseema district after Dr Ambedkar. It sought suggestions and objections from the people residing within Konaseema.

People have been urged to send objections and suggestions, if any, to Konaseema district collector within 30 days.