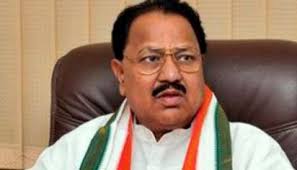 Former minister, twice PCC president, a party veteran from Telangana, “D Srinivas is planning to leave the Congress. He may join TRS. Joining BJP is  also not ruled out.”

This is the talk in Gandhi Bhavan, the Telangana Congress headquarters, and in Nizambad, Srinivas’ home town. Ask any of his aides, pat comes the reply, “What is the option before him?”

The party is insulting him, they allege.

The man, who earned the moniker of “winning-horse” in the company of YS Rajasekhar Reddy  from Congress high-command in his heydays, is now persona non grata in 10, Jan Path, Sonia Gandhi’s residence in New Delhi. After the defeat of the party in 2014 elections many T-Congress leaders have fallen from the grace of  party high command. One such leader is D Srinivas, who is popular as DS. DS expected renomination to the Legislative Council this time. It did not happen amid changed equations.

“He was not only denied the MLC ticket, but had been thoroughly humiliated by the party. The party picked up Akula Lalita from his home district. DS was not all informed about the decision. In fact, Sonia Gandhi thought of re-nominating him. But, some leaders like Digivijay Singh influenced her against DS,” one of his close aides told telug360.com.

It was not the only instance where he was not consulted.  On many issues, he was kept out of loop and one such important occasion was Rahul Gandhi’s Telangana visit in May, 2015.  When Rahul was in Nirmal in Adilabad district, DS was not allowed to meet the party vice president. According to his aides, of late even Sonia Gandhi’s office is also not enthusiastic about arranging madam’s audience to DS. When he brought his predicament in state party to the notice of party president through some friends, she had reportedly informed him that such issues should be tackled at the state level. It is in stark contrast to the respect he commanded from 10, Jan Path some time back.  Sonia Gandhi used to summon him to Delhi even at the slightest disturbance in the party before the division of the state. He was the only leader from Telangana to have unrestricted access to 10, Jan Path. His clout was so much before the 2004 election that while appointing him as the PCC president for united Andhra Pradesh, the then AICC general secretary in charge of the state Gulam Nabi Azad described DS and YS as winning horses. Again in 2009, calling him a winning horse, party appointed him as PCC president for the second term. On both occasions he lived up to his moniker.

Now, DS, who has been with the party since his NSUI-college days, is now totally cut off from the party.

His bad luck he could not win any election since 2009.

This is the background of the talk about his imminent quitting of the party.

Talking to telugu360.com, a close aide of DS admitted that TRS was one option as relations with party do not seem to returning to normality.

“TRS has been inviting him for quite some time. The party has even offered him local body constituency MLC seat for which election are likely to be held soon,” they say adding that some time back, BJP sources also had contacted him. “BJP has big assignment for him in Delhi,” they claimed.

According the aides DS is waiting for some rapprochement. Because, the former APCC president is finding it very painful to severe a 40-year long bond with Congress.