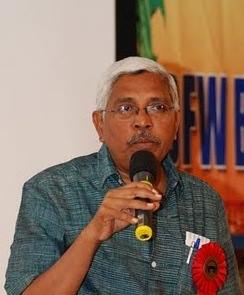 Telangan JAC chairman and university teacher Prof M Kodandarao appears to be dissociating from his mentor and chief minister KCR. There has been speculation about the his future course of action. Some say he is planning a new political outfit with a post-separate state agenda while other say he would launch a mass movement for the time being around issues the TRS government ignored and the issues thrown up by the bifurcation.

In Telangana he is a loner now. Though he still wears the title “JAC chairman” on his sleeves, few take him seriously. Though now and then he raises his voice against the issues like section 8, shifting of Osmania General Hospital etc. they were proven inconsequential. Once a commander of umpteen number of JACs that sprang up in very town, street and village, the soft-spoken political science teacher is now rendered non-entity in Telangana politics as well as administration.  He has not been given any role in the so called reconstruction of Telangana. One of the brilliant teachers of Osmania university is retiring next months. The post-retirement oblivion  seems to be haunting him.

So, he has chosen a way out to prove that he is still relevant in Telangana. He joined hands with another Professor Yogendra Yadav of New Delhi and participated in his Farmers Rally yesterday. Yadav, after quitting Aam Admi party, floated an outfit ” Swaraj Abhiyan, to fight for a ” Just India”. Talk is that Kodandaram will work under Swaraj Abhiyan banner for some time and work towards cause of farmers.

Many think, all those who are disillusioned with the policies of chief minister K Chandrasekhar Rao would rally around the Osmania Professor and he would again acquire a JAC-like dimension to bring the TRS government to its knees and force it to work for people’s Telangana.

Giving credence to this speculation, prof Kodandaram accused TRS government in Delhi of doing nothing for farmers of nascent state. Interacting with media in national capital, he rubbished the talk that there were no suicides among the farmers of Telangana.

“The estimates of union government say about 800 farmers committed suicides in Telangana. All previous governments are responsible for this tragic situation. Unfortunately, the TRS government also has done nothing to prevent the suicides among the farmers,” the TJAC chairman said.