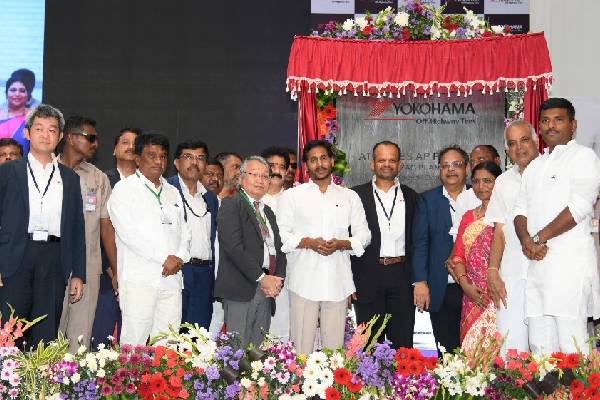 After inaugurating the first phase of AP Tires unit at the AP SEZ here on Tuesday, the Chief Minister said that the Japan based Yokohama Company has begun production in just 15 months and the second phase is likely to go into steam by August 2023.

The company stands in fifth place in world ranking and is likely to move to third spot soon, the Chief Minister said, adding that such a Company coming to AP is a happy sign. In the first phase, the Company has invested Rs 1250 crores providing employment to over 1200 people. In the second phase employment would be created to over 800 people.

During the past three years an investment of Rs 39,350 crores has come through 17 large scale industries and 56 major industries would be setting up shop in the State in the coming two years.

In the MSME sector, 31671 industries are investing Rs 8,285 crores. A revival package of Rs 1463 crores was given to MSMEs, he said. Earlier, Adani was just a name but after came to power both Adani and Ambani have been looking towards AP, he said.

In all 1.54 lakh crores is coming in as investments providing employment to over 1.64 lakh people, he said. Within two months Adani Data Centre is coming up at Vizag and locals will get 75 percent of the jobs, he said.

AP is the only State with three industrial corridors and nine shipping harbours coming up, he said. In exports as well, the State is poised for a big leap from 2 percent to 10 percent of the national average. For three consecutive years the State has been on top of the Ease of Doing Business list.

He assured the industrialists that the government will extend full cooperation if they come forward.