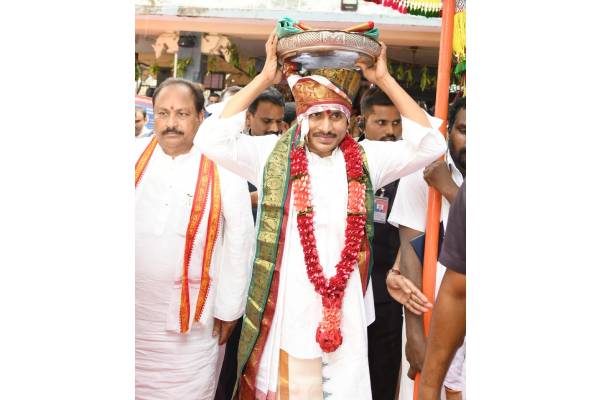 Chief Minister Y S Jagan Mohan Reddy presented silk robes to the presiding deity Goddess Kanaka Durga atop Indrakeeladri Hill in Vijayawada on Sunday. As the day was auspicious as Moolanakshatram, the chief minister presented the silk robes to the deity on behalf of the state government.

Ministers and the temple priests received the chief minister at the hill with temple rituals. The priests blessed him by chanting holy hymns and greeted him on his arrival.

The priests blessed the chief minister, wrapped up the traditional towel and gave him the silk robes to be offered to the deity. The chief minister was then taken in a procession amid chanting of vedic hymns by the priests.

After the chief minister presented the silk robes, the priests offered him the temples’ prasadams.

Later, the chief minister went back to his camp office at Tadepalli.

Meanwhile, the devotees are visiting the temple in large numbers after three years, which were down with Covid 19. The festival would end on October 5, with the deity taken in a swan boat for a ride in river Krishna. A few lakhs of devotees are expected to witness the ride of the deity in the river.

The officials have made all arrangements for the historic ritual to be watched by the devotees from Prakasam Barrage. This year, the Kanaka Durga Flyover would also be occupied by the devotees to witness the river ride of the deity on Dasara day.