The makers of RRR unveiled the Janani video song which happens to be the soul of RRR. SS Rajamouli said that the number was used throughout the film as a background score. Janani is a soothing slow-paced melody which is the major emotion of RRR. The makers unveiled the video song of the film which has all the lead actors present. NTR and Ram Charan are just flawless and the looks of the lead actors are unveiled in the song. Keeravani’s voice makes the song magical. Every beat from the single is clear and the quality of the song is top-notch.

The post-production work of RRR reached the final stages and the makers are all set to kick-start the promotions. NTR, Ram Charan, Alia Bhatt and Olivia Morris are the lead actors in RRR that is announced for January 7th 2022 release. DVV Entertainment bankrolled this big-budget film.

Rajinikanth’s advice for Dhanush and Aishwaryaa 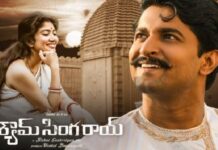