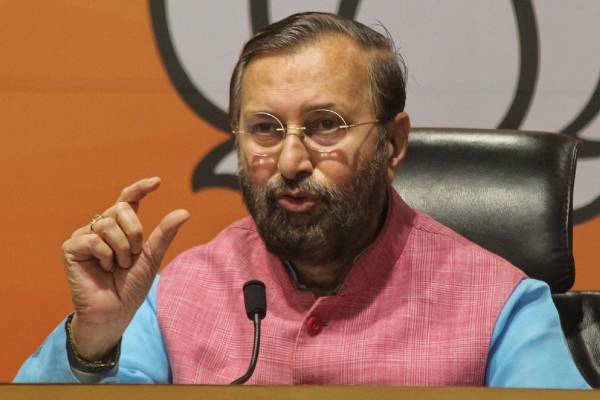 The former central minister alleged that the state government is a government of KCR, his, son, daughter and son-in-law.

“It is not the government of people,” he said while addressing a public meeting in Kamareddy district as part of the ongoing ‘Praja Sangrama Yatra’ of state BJP chief Bandi Sanjay.

Javadekar alleged that the Chief Minister never steps out of his house and goes to secretariat.

“He calls the secretariat to his house,” the BJP leader claimed.

He said in 2023 polls, BJP’s contest will be with Telangana Rashtra Samithi (TRS), and exuded confidence that the saffron party will come to power.

Javadekar also said he is confident that BJP will win the ensuing by-election in Huzurabad constituency.

The BJP leader alleged that KCR failed to fulfill his promise of a job to every household.

“Where are the jobs,” he asked and claimed that the government has not filled one lakh vacancies, which arose during the last seven years due to retirement of employees in various departments.

Stating that there are 1.45 lakh vacancies, Javadekar said only few were filled.

He further alleged that it was not proper on part of the state government to blame the Centre for everything and claim credit for all the schemes including even those being implemented with the central funds.

The BJP leader said that the Modi government at the Centre was giving priority to development of highways. He pointed out that several highways in Telangana were developed during the last seven years.

Bandi Sanjay on Tuesday completed 300 km as part of his walkathon.

Addressing public meetings during the padyatra, he is highlighting the TRS government’s ‘failures’ on various fronts.