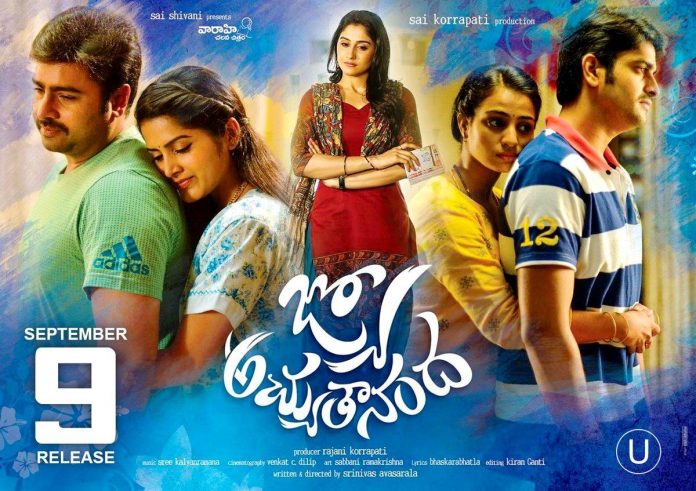 Talented actor and director Srinivas Avasarala made an interesting and impressive debut with Oohalu Gusagusaladey in the past. He is now back with his second film Jyo Achyutananda, which features young actors Nara Rohit and Naga Shourya in the lead roles. Regina Cassandra is the female lead and Kalyana Ramana composed the music. The trailer received exceptional response and raised the expectations on the film. Produced by Vaarahi Chalana Chitram, Jyo Achyutananda released all over today. Here is the complete review of the movie:

Story:
Jyo Achyutananda is the story of two brothers Achyut (Nara Rohit), Anand (Naga Shourya) and a girl Jyosthna (Regina Cassandra) who happens to be a tenant in their home. The brothers evince interest in Jyosthna however she tricks them with a friendly reply every time the brothers try to impress her. She moves to USA for her higher studies and during this time the brothers get married to their relatives. It is after five years, Jyosthna returns back to the country and the rest of Jyo Achyutananda is all about how they react meeting their ex-girlfriend. Watch Jyo Achyutananda to know about the rest.

Analysis:
The best thing is Srinivas Avasarala’s films is that the things get framed and presented quite naturally. The first half of the film has real fun with some stupendous one-liners throughout. The bonding between the brothers is quite natural and convincing. The songs are decent and they are placed well. The way the story is narrated looks extremely convincing. On the whole the first half of Jyo Achyutananda seemed extremely innovative and impressive.

The second half of the film is decent for the first half an hour however it takes an illogical path later. The slow pace makes the audience feel bored during the mid of the second half. Some of the episodes are dragged completely. The dialogues are the major strength of the film and the climax is decent. On the whole the second half dips down at parts but ends up decent finally.

Performances:
Nara Rohit is impressive as Achyut and he is shown with enough variations and the actor excelled in the emotional episodes well. He revealed that he lost 11 kgs but it is not visible on screen. He looked massive in most of the episodes. Though it is tough to watch him as a solo actor, he has been decent in the role as he enacted elder brother of Shourtya. Shourya did a good job and he is the perfect choice for the role of Anand. Regina is gorgeous and her stunning screen presence and her outstanding performances needs special mention. All the other actors did their bit.

The story of the film is fresh and unique. The screenplay and the dialogues are penned well. The cinematography is the major highlight and the movie is presented in a colorful way within the availed budget. The music is decent and the background score is elevating. The editing is crips and the production values are good. Srinivas Avasarala once again comes out with a convincing feel good drama that will impress the multiplex audience big time.

Final Word:
Jyo Achyutananda is one of the clean and fun movies in recent times. With 2 hr 5 mins crisp run time, this movie appeals to class audience. The movie would have been better if a special care has been taken on the last half an hour, which tests the patience of the audience. On commercial aspects, Jyo Achyutananda will do well across the A centres and will connect well to multiplex audience. Kudos to Srinivas Avasarala for a clean and engaging film like Jyo Achyutananda. 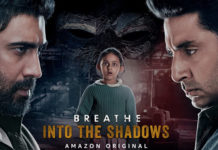 Breathe: Into The Shadows Review: Give it a Skip