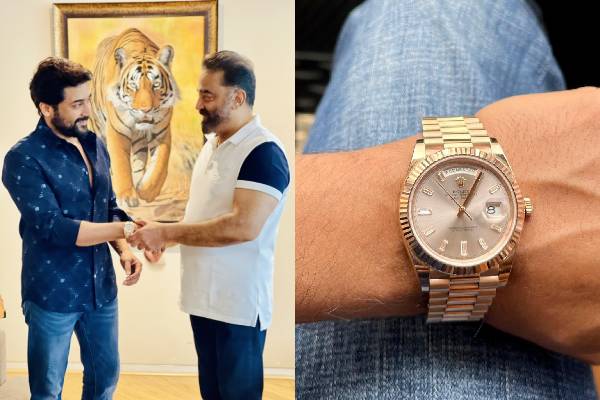 Veteran actor Kamal Haasan wanted happening actor Suriya to essay a cameo in Vikram and the actor stunned everyone in style. Suriya is a die-hard fan of Kamal and he gave his immediate nod after he was offered the assignment. After Vikram has been declared as a blockbuster, Kamal has been treating his team with surprises and gifts. Kamal gifted an expensive Rolex watch today symbolizing the character of Suriya in the film.

Suriya was thrilled with the gesture of Kamal Haasan and he posted the pictures on his social media page. Kamal also announced that he and Suriya would soon work together in their next film. Vikram is a stylish action entertainer directed by Lokesh Kanagaraj. Vijay Sethupathi and Fahadh Faasil played other prominent roles and Raajkamal Films International produced Vikram. The makers also hinted about the film’s sequel which will be announced at the right time.

A moment like this makes life beautiful! Thank you Anna for your #Rolex! @ikamalhaasan pic.twitter.com/uAfAM8bVkM