Young actor Nikhil’s recent offering Karthikeya 2 released on Saturday and it emerged as a super hit. The number of shows and screens are doubled on Sunday and Monday is already packed taking the holiday advantage. The film dominated all the new released and is doing great. Karthikeya 2 had a pan-Indian release but the film had limited shows across the North Indian belt. With the word of mouth quite positive and the Hindi releases Laal Singh Chaddha, Raksha Bandhan receiving a poor response, the number of screens and shows for Karthikeya 2 are increased in the North Indian circles.

Karthikeya 2 opened with less than 60 shows in North India and they are expected to touch 1000 shows by today. The footfalls also increased all over and Karthikeya 2 is expected to end up decent in Hindi. The entire team is thrilled with the response of the film. Nikhil and his team is promoting the film all over. Karthikeya 2 is directed by Chandoo Mondeti and this adventurous attempt is made on a big-budget. People Media Factory and Abhishek Agarwal Arts are the producers of Karthikeya 2. 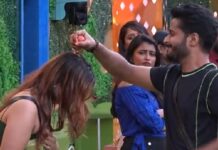